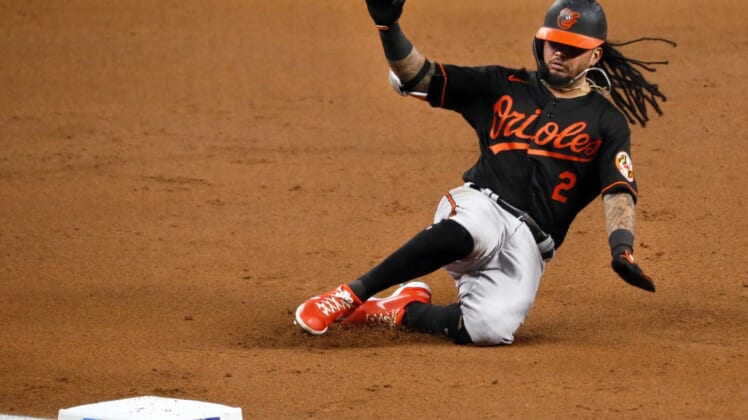 Freddy Galvis and Cedric Mullins each had two hits and Jorge Lopez delivered a bounce-back performance on the mound to lead the Baltimore Orioles to a 5-2 win over the host Texas Rangers on Friday night in Arlington, Tex.

The Orioles entered the series struggling offensively and having lost eight of their past 10.

But Baltimore snapped the Rangers’ three-game winning streak by belting two home runs and six extra-base hits overall off starter Mike Foltynewicz, who suffered his third loss in as many starts to open his first season with Texas.

Galvis tripled to lead off the third and Mullins doubled to kick-start a three-run fifth for the Orioles, who recorded all five runs and seven of their hits off Foltynewicz.

Mullins, who had a 15-game hitting streak snapped on Thursday against Seattle, went 2-for-4 with an RBI double. Rio Ruiz added to Baltimore’s early 2-0 lead with a two-out, 406-foot, solo home run off a 95-mph sinker in the fourth inning. DJ Stewart also hit a two-run homer off Foltynewicz as part of a three-run fifth inning for the Orioles to give them a 5-0 lead.

Foltynewicz struck out six and walked one on 82 pitches.

Lopez, who entered the game with an 11.42 ERA after losing his first two starts, was drastically better.

Needing a solid start to make a case to keep his spot in the rotation, Lopez was perfect through the first three innings with six strikeouts and didn’t allow a hit through four before giving up back-to-back solo home runs to David Dahl and Nick Solak to lead off the fifth.

Lopez struck out eight and walked only one on 75 pitches.

Both bullpens were lights out as Baltimore relievers Paul Fry, Dillon Tate, Adam Plutko and Cesar Valdez combined to throw four shutout innings, allowing two hits while striking out seven with no walks. Valdez picked up his third save of the season.

Kolby Allard struck out five over three perfect innings in relief for the Rangers and Brett Martin pitched a perfect ninth.