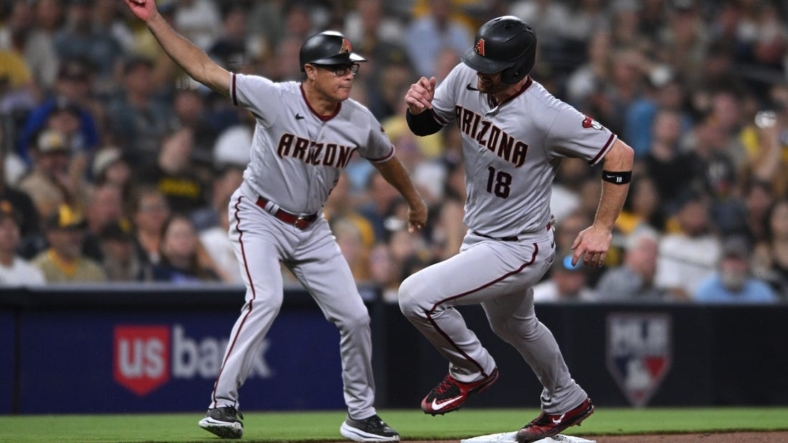 San Diego catcher Jorge Alfaro delivered a walk-off hit as the Padres rallied from a 5-0 deficit to beat the Arizona Diamondbacks 6-5 Tuesday night.

Alfaro hit a two-run single off Ian Kennedy with two out in the ninth as the Padres snapped a three-game losing streak.

The Padres were trailing 5-4 going into the bottom of the ninth when Jake Cronenworth beat the relay to reach first on a forceout. With two out, Wil Myers singled to center ahead of a bases-loading walk drawn by Jose Azocar. Alfaro then singled into center past the dive of shortstop Sergio Alcantara to give the Padres the win.

Reliever Nick Martinez (4-3) got the win for the Padres, who had 4 2/3 innings of one-hit relief from their bullpen. Kennedy (4-7) took the loss with his sixth blown save.

After extending the Padres’ scoreless innings streak to 26, Kelly gave up all four of San Diego’s runs and finished the night allowing four runs on three hits and a walk with five strikeouts over seven innings.

Rojas hit the game’s first pitch from Joe Musgrove to give Arizona an immediate 1-0 lead. The opposite-field homer was Rojas’ eighth of the season. The Diamondbacks made it 2-0 in the fourth when Carson Kelly reached on a fielder’s choice and scored from first on former Padre Alcantara’s two-out double into the right field corner. Varsho led off the fifth with his 21st homer of the season, a drive to right. Two hitters later, Walker cleared the wall in center for his 32nd homer.

The Padres added a third run in the inning. Jake McCarthy singled off Musgrove, stole second and moved to third with one out on catcher Alfaro’s throwing error. Tim Hill replaced Musgrove and retired Carson Kelly on a grounder to second, McCarthy scoring on the play.

The Padres scored three runs off Merrill Kelly in the bottom of the fifth. Bell drew a leadoff walk and Cronenworth (No. 14) and Kim (No. 8) followed with back-to-back homers. Bell hit his 17th homer in the seventh to bring the Padres to within a run.

San Diego had runners at the corners with one out in the eighth. But Kyle Nelson struck out Juan Soto and Reyes Moronta came on to retire Manny Machado on a pop out to first.