Jonathan Martin was long thought to have little passion for the game of football, and he confirmed those suspicions with a since-deleted message on Twitter Sunday night.

Martin retired from the NFL last month after suffering a back injury. Known best for his role as the victim to Richie Incognito’s bullying during his time with the Miami Dolphins, Martin expressed “nothing but love” for his former San Francisco 49ers and Carolina Panthers teammates while completely ignoring the Dolphins.

Martin also wrote he’d miss the game of football and that he is proud to have played in the league, even though he didn’t play as long as he wanted to play.

However, he posted another message that was swiftly deleted. Thankfully, the folks at Black and Blue Review (a Panthers blog site) captured the image before it was removed. 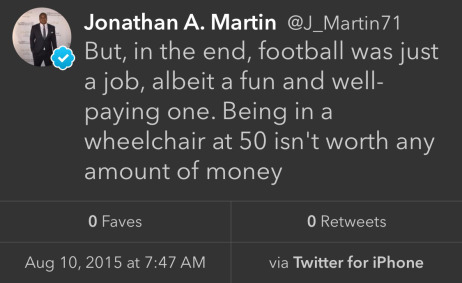 It’s really a shame that Martin deleted this.

While on the one hand, it sort of looks bad that he viewed his time in the NFL as a J-O-B, he makes a completely valid point in the second half of the deleted message. Playing football isn’t for everyone, and nobody should fault him for not wanting to spend more than half his life in agony while physically disabled.

Martin’s back injury was so severe that he was told he’d need surgery to continue playing the game of football. Rather than endure that process, he chose instead to just move on to another chapter in his life.