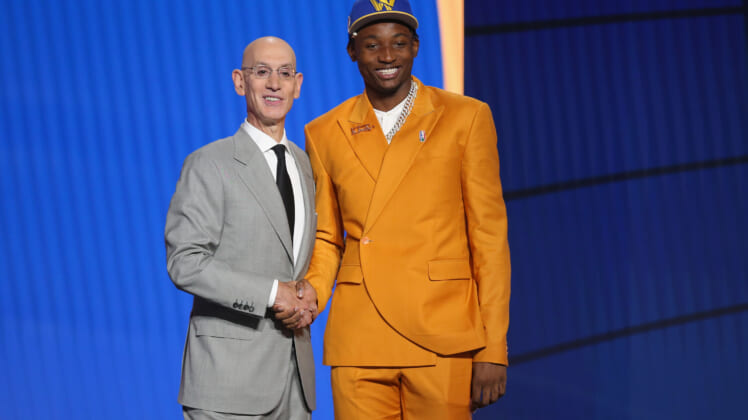 Forward Jonathan Kuminga is seen as one of the highest-upside players in the entire 2021 NBA Draft. The former top recruit starred in the NBA G-League for the Ignite and showed athleticism that’s pretty much unmatched in the draft.

Despite this, it was still somewhat of a surprise to see the Golden State Warriors select Kuminga with the seventh pick in the draft. While his ceiling is incredibly high, the forward is about as raw as they come. He has among the lowest floors of any projected lottery pick in the annual event, too.

During his stint with the Ignite in the Orlando Bubble, Jonathan Kuminga averaged 15.8 points and 7.2 rebounds. He also shot a mere 39% from the field, including a 25% mark from three-point range. Hence, scouting reports calling him incredibly raw.

Leading up to them being on the clock, reports indicated that the Warriors were still fielding offers for the seventh pick. This makes sense given that many expect Golden State to make win-now moves to take advantage of the back end Stephen Curry’s prime.

Remember, this selection was originally acquired in the February 2020 deal that sent Andrew Wiggins from the Minnesota Timberwolves to the Bay Area for D’Angelo Russell.

There’s still a chance that the Warriors will opt to move Kuminga once the NBA trade market takes hold following the NBA Draft. Right now, he doesn’t seem to be a great short-term fit for a win-now Warriors team that boasts Curry as well as fellow three-time champions Draymond Green and Klay Thompson.