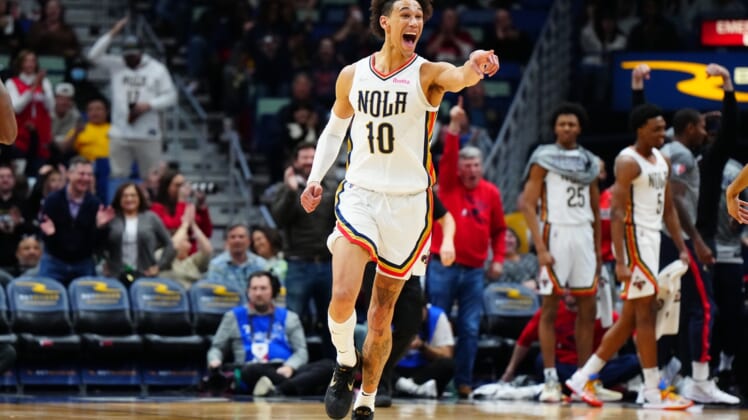 Jonas Valanciunas had 32 points and 10 rebounds as the host New Orleans Pelicans ended a four-game losing streak with a 130-105 victory over the Houston Rockets on Sunday night.

The Pelicans took command by outscoring Houston by a combined 69-40 in the second and third quarters.

The lead changed hands eight times and the score was tied six times before the Rockets had a strong finish to the first quarter. They finished with 18 points in the paint and shot 61.9 percent from the floor (13 of 21) to take a 32-29 lead at the end of the period.

Houston increased the lead to six before Marshall scored five points during a 9-0 run that gave New Orleans a 46-43 lead.

Tate’s layup ended a nearly three-minute scoring drought for the Rockets, but Hayes scored five points as the Pelicans increased the lead to 60-48.

Houston trimmed the deficit to seven, but Alvarado made a 3-pointer and assisted on a Hayes dunk as New Orleans took a 68-55 halftime lead.