Jon Gruden and the Las Vegas Raiders Return on Investment 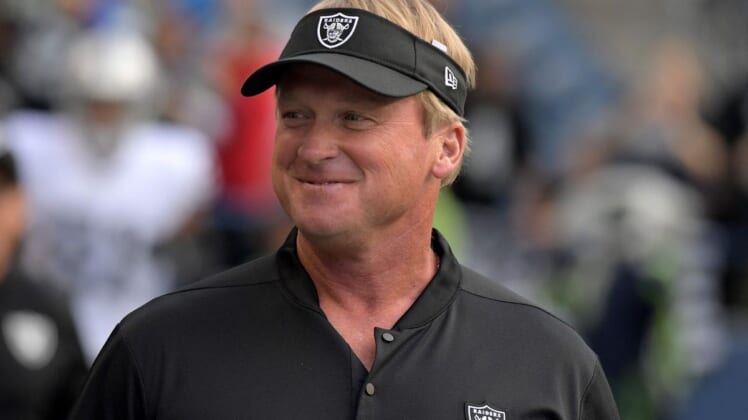 The return of “Chucky” was a happy and proud moment for most in Raider Nation as Jon Gruden came back “home” after nearly two decades way from the Silver and Black. But has the return on the investment been good enough?

Think about the big picture for a moment. This isn’t all about Jon Gruden’s 10-year, $100 million contract. Las Vegas Raiders owner Mark Davis’ investment in his head coach has much more meaning to it.

Keep in mind the NFL had already approved of the Raiders’ move to Las Vegas before Davis convinced Gruden to leave the Monday Night Football booth for another head-coaching stint with the Silver and Black.

Davis comfortably pushed his chips to the middle of the table with Gruden, allowing him power to reconstruct and develop a roster under “his vision” (h/t Scott Bair of NBC Sports Bay Area).

To assess Jon Gruden’s job performance after two years, we cannot just stop at the team’s win-loss record. Our evaluation must extend to roster moves as well. Based on Davis’ words, the head coach is also the shot-caller. Even McKenzie’s successor, Mike Mayock, acknowledges that Gruden has “final say” in the chain of command.

We also know Gruden calls plays. When the Raiders jumped off to a sluggish start last season, he took some heat away from quarterback Derek Carr and put the responsibility on himself to improve the offensive output.

“I’m not going to put it all on Derek,” Gruden said. “We take responsibility as the play caller. I’m calling the plays and I’m designing some of the stuff, so I put it on myself.”

In two years, the Raiders went from 4-12 to 7-9, which shows progress, but the team fell apart amid a playoff race during the previous term. The Silver and Black lost five of its last six contests.

Still, we can at least say the team took steps in the right direction while Jon Gruden and Mike Mayock overhauled the roster.

Let’s take a closer look at the offense. Gruden has garnered widespread respect for his offensive mind. He ran a QB camp, which added to the perception of his expertise in signal-caller evaluations. Yet the team’s numbers show a play-caller who’s either mediocre or struggled in critical offensive areas.

By the way, Carr has 40 touchdown passes under Gruden. That’s one fewer than Mitchell Trubisky, who’s going to battle Nick Foles for the starting job in the upcoming season, and one more than Ryan Tannehill, who’s played nine fewer games over the last two campaigns.

As Gruden said, we should look above Carr and hold him accountable for his play calls. Let’s break down the Raiders scoring by quarter over the last two seasons:

Fans have questioned Gruden’s ability to adjust throughout games and counter defenses after halftime. The numbers above justify their concerns. The Raiders haven’t been able to keep pace with opponents after two quarters. The offense doesn’t seem to have a changeup, curveball or second gear after 30 minutes.

For perspective, the Silver and Black average a shade under three points per third quarter since 2018.

Perhaps fans should temper their expectations on the Raiders’ 2020 offense. With a glimpse of Gruden’s recent offensive trends, fans may be cautiously optimistic, though upgrades within the pass-catching group can change that pattern.

Even though the Raiders’ roster has undergone constant changes over the last two terms, Gruden must field an offense that’s more dynamic and productive.

The Silver and Black can’t challenge the Kansas City Chiefs for the AFC West title with those numbers. Gruden needs a counter punch because he won’t win many football games with first-quarter haymakers especially if those opening flurries rank 17th in scoring leaguewide.

Mayock holds the general manager title and shares responsibility for the team’s successes and shortcomings, but as he and Davis noted, Gruden has the final stamp of approval. With broad power comes more culpability.

Gruden has shuffled and reshuffled the deck at wide receiver. He also took a joint gamble with Mayock on Antonio Brown, which seemed like a fair risk last offseason.

Even if you pardon the Raiders for a calculated roll of the dice on Brown, Gruden permitted signings and trades for several wideouts who provided minimal or no impact in the passing game:

Before Mayock, Gruden traded a third-round pick to the Pittsburgh Steelers for Bryant a.k.a. the “White Tiger.” Although talented, he only caught 19 passes for 266 yards in eight games with the club. In 2018, the 28-year-old went on injured reserve (knee) and then the league suspended him indefinitely for violating the substance-abuse policy.

Switzer, Nelson, Grant, and Davis didn’t have starter expectations, but the Raiders lacked depth at wide receiver because none of those guys panned out in their short stints with the team.

So before you point the finger at a lackluster group of wideouts over the last two years, make sure you hold Jon Gruden accountable for that.

As a Raider, Jordy Nelson logged 63 catches for 739 yards and three touchdowns, which is the team’s second-best pickup among the pass-catchers behind tight end Darren Waller during Jon Gruden’s second stint. Remember, he inherited Jared Cook, who was on the roster in 2017.

Gruden deserves credit for his role in pushing the Tampa Bay Buccaneers over the hump for their Super Bowl 37 victory over the Raiders. However, his overall résumé illustrates a near-.500 head coach who’s struggled to field an average scoring offense since his last run with the Silver and Black between 1998 and 2001.

Gruden as a Head Coach:

Again, we cannot take Jon Gruden’s Super Bowl away from him, but even that 2002-03 Buccaneers team listed bottom-half in points (18th). He had a historically stellar defense that gave up the fewest points and yards that year.

With Gruden’s shortcomings in scoring, we can argue it’s critical that the Raiders figure out their defensive woes as opposed to placing immense pressure on the offense to outscore opponents. Gruden hasn’t lit up the scoreboard since he had Rich Gannon, Charlie Garner, Tim Brown and Jerry Rice (for a year).

Perhaps fans should temper their expectations on the Raiders’ 2020 offense. With a glimpse of Jon Gruden’s recent offensive trends, fans may be cautiously optimistic, though upgrades within the pass-catching group can change that pattern.

The Raiders added a dynamic wide receiver in Henry Ruggs III, Lynn Bowden Jr., who’s a versatile playmaker as a receiver and ball-carrier and Bryan Edwards stands at 6’3″, 212 pounds with the ability to attack the red zone. Tyrell Williams and Hunter Renfrow will go into Year 2 in the system. Most importantly, Waller looks like a rising star at tight end.

While Carr faces pressure to produce a gem-worthy season with new weapons and Marcus Mariota as the primary backup, skpetics should also keep a critical eye on Gruden. As the play-caller, he has to optimize all that talent and put players in positions to flourish as well. Remember, this roster has been created under his vision.

Now, we need to see Jon Gruden exercise his creativity in play design to generate more points before anyone screams about better execution.