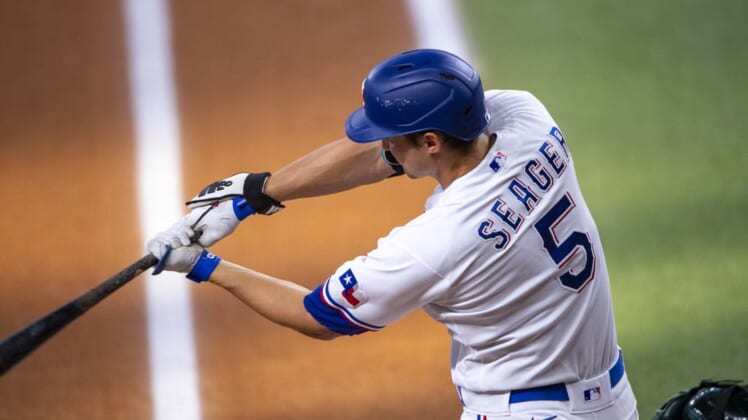 Texas right-hander Jon Gray tossed seven shutout innings and struck out nine in the Rangers’ 5-2 victory over the Oakland Athletics on Wednesday in Arlington, Texas.

Gray (6-4) was in complete control, giving up one hit and no walks while matching his season high for innings. A five-run first inning was all the support he needed.

Vimael Machin, who singled leading off the fourth inning, was the only A’s batter to reach base off Gray.

Matt Bush threw a perfect eighth inning, but the Rangers ran into trouble in the ninth, when the A’s connected on two home runs off Jose Leclerc. Skye Bolt led off the inning with his first of the season, and with two outs, Ramon Laureano hit his eighth of the year.

After Sean Murphy walked and Seth Brown doubled, Garrett Richards took over for Leclerc. Richards needed just one pitch to retire Stephen Vogt on a fly ball to center and pick up his first save.

Behind Gray’s strong start, the Rangers took two of three in the series.

A’s All-Star Paul Blackburn (6-5) struggled in the first inning but was able to regroup. He wound up lasting six innings without yielding any more damage.

Blackburn allowed just three hits but was hurt by four walks. He struck out four.

The right-hander gave up at least five runs for the third time in his past five starts, during which he is 0-3 with a 7.46 ERA.

Rangers shortstop Corey Seager had his string of five straight games with a home run snapped, but he chipped in with an RBI single in the first inning.

Seager went 1-for-3 and walked in the eighth inning, his final plate appearance.

Texas’ Josh H. Smith walked to open the first inning, and Marcus Semien reached on a forceout. Semien stole second, and he scored on Seager’s single. After two walks and a strikeout, Leody Tavares and Brad Miller each delivered two-run singles.

The Rangers won for the fourth time in six games while the A’s fell for the fifth time in seven contests.