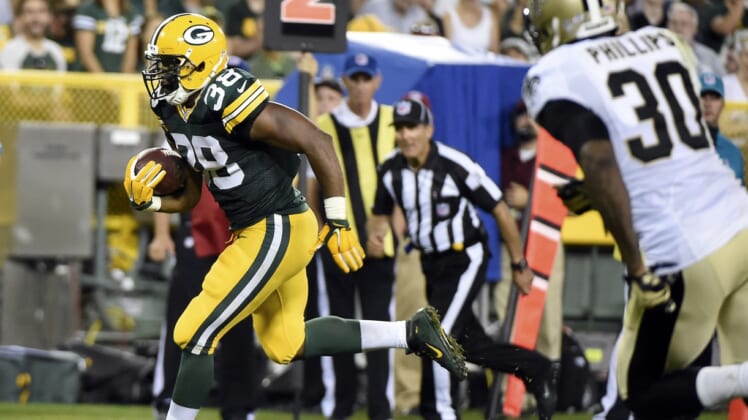 McCarthy had seen enough. Eddie Lacy — slower than molasses these days — and veteran James Starks trudged ineffectively for more than two quarters against a Detroit Lions defense that hasn’t been great against the run all year. The two of them managed just 19 yards on 14 carries. Without any running game to keep Detroit’s pass-rushers honest, quarterback Aaron Rodgers was running for his life and the offense was stagnant.

Down 20-0 in the third quarter, McCarthy gave John Crockett the nod, and the rookie didn’t disappoint.

“We develop young guys,” said McCarthy, via Bob McGinn of the Journal Sentinel. “If you had been on our sideline you could see the juice that he brought. The way his teammates responded to having him go in the game…that is worth a million words.”

Sometimes all it takes is a little spark. Crockett showed a relentless drive with you-can’t-bring-me-down effort that had previously been missing from Rodgers’ backfield collaborators.

While his final stat line of five carries and 22 yards might not seem like anything to get excited about, it’s important to realize his ability to run the ball was what finally allowed Rodgers to have any time to throw the ball.

Running with a pep in his step, Crockett burst through for gains of four and 12 yards on the first scoring drive of the game for the Packers, and that’s when the game turned upside down. Green Bay quickly got the ball back on a turnover and scored again, stealing the momentum away from the Lions for good.

Green Bay won on a miraculous throw by Rodgers to tight end Richard Rodgers, and that play deservedly got all the national spotlight. However, Crockett’s contributions shouldn’t go into the night as an afterthought. He’s likely going to be a guy McCarthy starts to lean on as the season progresses.

“He’s a guy that’s been working super hard,” McCarthy said. “We felt like he deserved an opportunity. Initially, it was more special teams. With his running style, I decided to stick him in there. He gave us a spark.”

Thursday night’s thrilling win was a huge one for Green Bay, which had lost four of five games heading into the contest against Detroit. Now with a record of 8-4, the Packers would claim the NFC North if the Minnesota Vikings lose to the Seattle Seahawks on Sunday.

Given the way Lacy has failed to provide the Packers with steady production, McCarthy could decide to give Crockett more and more opportunities to succeed. And, based on how he attacked his first opportunity, it shouldn’t surprise anyone if the rookie ends up becoming a key figure within Green Bay’s offense the rest of the way.