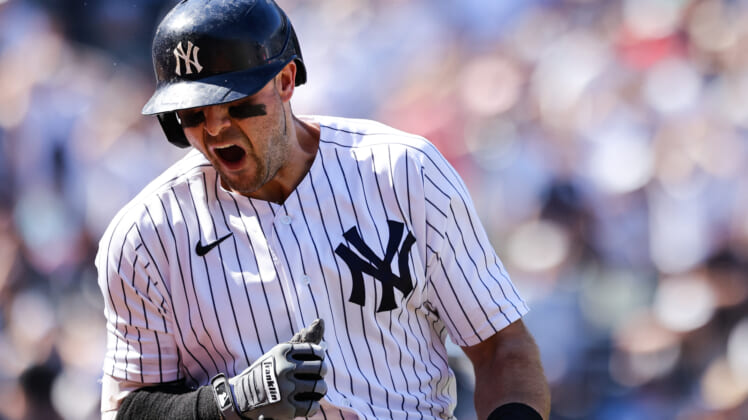 When the New York Yankees acquired Joey Gallo before the MLB trade deadline in 2021, it was viewed as a huge addition for a team with World Series aspirations. Fast forward a year later, the best team in baseball could be looking to dispose of one of its most expendable players.

New York paid a significant price for Gallo, sending a trade package headlined with Ezequiel Duran, Glenn Otto and Josh Smith to the Texas Rangers. Brought in for his defense, versatility and massive power, Gallos is one of the most disappointing players in MLB in the last year.

The results since he put on a Yankees uniform have been disastrous. Unfortunately, it’s even worse this season. As June comes to a close, Gallo’s slash line .169/.280/339 and 38.9% strikeout rate are among the lowest in baseball.

It’s evident the 6-foot-5 outfielder needs a change of scenery. While Brian Cashman won’t like it, the club will have to sell low. With that in mind, let’s examine three potential landing spots for Joey Gallo.

It’s no secret that San Diego Padres general manager A.J. Preller loves Joey Gallo. He tried to acquire him from the Rangers in 2021 and even attempted to buy low on him this winter from New York. With the Yankees likely more open to moving him now, Preller would jump at an opportunity to buy.

Kerr, the No. 23 Padres’ prospect by MLB Pipeline, would provide some depth to the Yankees’ bullpen. The 27-year-old southpaw has spent the majority of his 2022 season at Triple-A (4.50 ERA), using an above-average fastball and decent secondary pitches. Ornelas, one a top-10 prospect in the system, offers intriguing power but likely needs a change of scenery.

From San Diego’s perspective, it gets Gallo out of New York. While some players thrive under the lights at Yankee Stadium, Gallo joins Sonny Gray among those who never fit. Gallo’s 18.8% Barrel rate this season isn’t too far off from his career 20.1% rate and he can play the corner outfield or first base. Even if he only returns to 30-homer power and a .750-plus OPS, that’s a worthwhile addition for the Padres at a low cost.

The Philadelphia Phillies expect Bryce Harper to return this season. Unfortunately, the reigning NL MVP won’t even have a shot to rejoin the lineup until late August. It leaves Philly in a desperate spot, needing to take a chance on a player like Gallo even with the risk of it backfiring.

At the bare minimum, Gallo is a better outfielder than Nick Castellanos. While moving Castellanos and putting Gallo in the corner outfield won’t completely make up for Harper’s absence, it does slightly improve this team. On top of that, Gallo’s profile with the bat seems to strongly fit with the Phillies’ lineup. He would get regular playing time on a contender and acquiring him wouldn’t cost as much as an Andrew Benintendi.

New York would love to strengthen its bullpen in a Gallot rade, but that is a weak spot on the Phillies’ roster. Instead, the Yankees pick-up 18-year-old catcher Rickardo Perez, signed to a $1 million bonus in January 2021. As for immediate help, Mickey Moniak can play all three outfield positions, with depth in center field being an area of weakness for New York.

As July arrives, Milwaukee Brewers outfielders find themselves near the bottom of the league in wRC+, OPS and FanGraphs’ Wins Above Replacement. Keep in mind, a lesser version of Christian Yelich is responsible for keeping those numbers from looking even worse.

Andrew McCutchen (92 wRC+, .679 OPS) has been a disappointment and is a liability defensively. While Hunter Renfroe is making an impact, durability is proving to be an issue. Enter Gallo, exactly the type of talent the front offices like to buy low on.

First, addressing the Yankees’ return. New York picks up a lottery ticket with outfielder Joe Gray Jr. A second-round pick in the 2018 MLB Draft, the 22-year-old outfielder has shown wild hot and cold streaks throughout his time in the minors. Given there is 50-grade raw power, he’s worth taking a chance on despite the .177/.283/.346 line at High-A. Meanwhile, Brent Suter (4.23 ERA) adds an experienced southpaw to the Yankees’ bullpen who dominates left-handed hitters (.167/.219/.233).

For the Brewers, Gallo makes the lineup better. He lands in an environment without any real pressure, a factor that could really help him return to the player we saw in Texas. It comes at a bargain price for Milwaukee where the upside far surpasses any potential risk.