The Philadelphia 76ers may not know what they’re doing with Ben Simmons, but they’ve now locked in their biggest superstar in Joel Embiid for the foreseeable future.

Ramona Shelburne of ESPN reported Tuesday that Embiid and the Sixers agreed to terms on a four-year, $196 million contract extension, and it’s a fully-guaranteed deal.

Embiid has dealt with injuries throughout his young career, even missing his first two seasons. However, the 27-year-old is still in the midst of his prime, and is coming off his most dominant stretch to date.

Philadelphia ranked second in defensive rating this past season, largely thanks to Embiid’s ability to protect the paint and his versatility and athleticism clogging driving lanes. Simmons played no small part in the Sixers’ elite D, but Embiid’s contributions can be somewhat overlooked due to how dominant he is on offense.

The only other huge contracts on the roster beyond Embiid are Tobias Harris and Simmons. It’s widely expected that GM Daryl Morey will eventually deal Simmons to another team — it’s just a matter of getting the proper compensation. 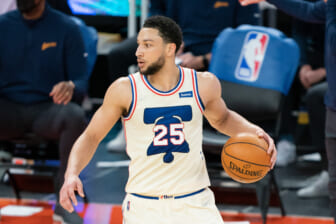 With Harris locked in for the next three seasons and Embiid locked up for even longer, Morey has a strong foundation to build around. The Sixers also have several young players like Tyrese Maxey, Shake Milton and Matisse Thybulle who could be attractive as trade chips in a Simmons blockbuster.

Either way, with the impassioned and charismatic leadership of Embiid leading the way under coach Doc Rivers and lots of flexibility in terms of how to build the roster upon Simmons’ eventual departure, Philadelphia’s outlook is extremely promising.