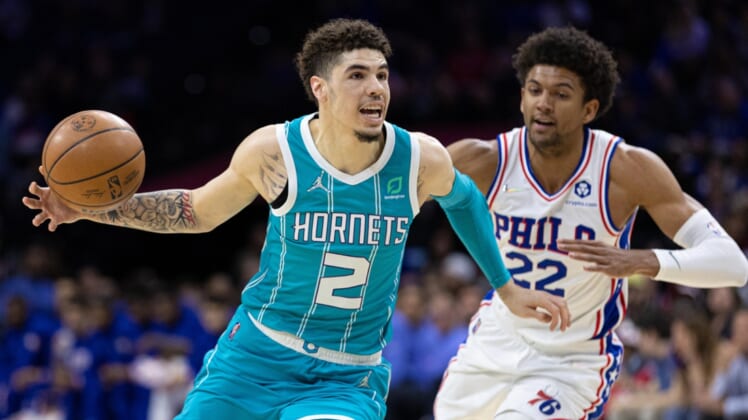 Joel Embiid collected 29 points, 14 rebounds and six assists to lift the host Philadelphia 76ers to a convincing 144-114 victory over the Charlotte Hornets on Saturday afternoon.

James Harden had 12 points, 13 assists and eight rebounds and Matisse Thybulle scored 12 points. Georges Niang and Shake Milton chipped in with 10 points apiece for Philadelphia, which tied a franchise record with 21 made 3-pointers.

Bridges threw down a dunk with 4:19 left in the second quarter to bring the Hornets within a bucket at 48-46.

Harris responded with his fourth 3-pointer on Philadelphia’s next possession.

The Sixers led 58-53 at halftime thanks in large part to Embiid’s 19 points and 11 rebounds.

Bridges had 11 points for Charlotte, which struggled from 3-point territory by making just 6 of 18 attempts.

The Sixers came out aggressive in the third quarter and used a 12-0 run to take a 72-57 advantage.

Bridges was whistled for a flagrant foul against Maxey with 6:57 remaining in the third. Bridges appeared to flail his arm around Maxey’s neck as he fell to the court. Maxey dropped in both free throws for an 81-63 lead.

After falling behind by 27, Rozier converted a three-point play and converted from beyond the arc at the buzzer to trim the deficit to 23 points. The Sixers were red hot in the third quarter, shooting 17 of 22 from the field.

Harris opened the fourth quarter with a short floater in the lane and DeAndre Jordan followed with a reverse dunk.

The Sixers continued to extend their lead as Maxey hit a difficult step-back 3-pointer for a 114-81 lead with 9:39 left.

Philadelphia cruised to the victory with relative ease.