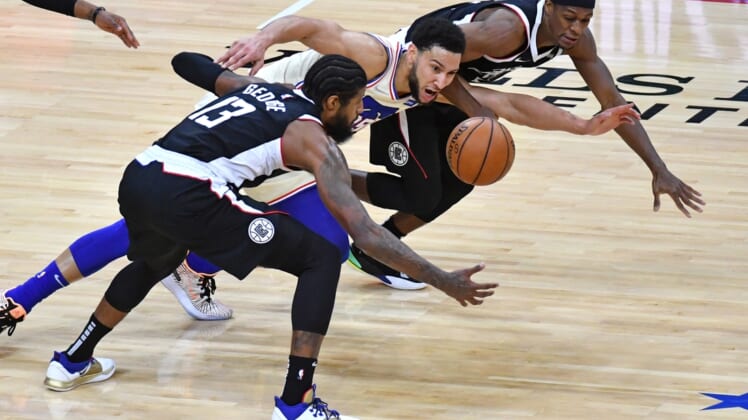 Joel Embiid totaled 36 points and 14 rebounds as the Philadelphia 76ers held on for a 106-103 victory over the visiting Los Angeles Clippers on Friday.

Paul George paced the Clippers with 37 points, nine rebounds and six assists, the fifth consecutive game with 30-plus points for the reigning Western Conference Player of the Week.

Patrick Patterson contributed 18 points off the bench for Los Angeles, which had its seven-game winning streak snapped. Marcus Morris Sr. added 15 points while Reggie Jackson had 13.

The Sixers took over the game early, jumping out to a 20-3 lead. However, the Clippers cut Philadelphia’s edge to 11 points by the end of the first quarter.

Behind the shooting of George (14 of 29 for the game), the Clippers cut Philadelphia’s advantage to three points with 2:50 left in the third quarter.

The Clippers continued to stay close in the fourth quarter and took the lead for the first time all night on a Patrick Patterson 3-pointer with 6:57 left that produced a 91-90 advantage.

The lead changed hands twice more before Shake Milton’s 3-pointer with 3:38 to go put Philadelphia up 97-94, and the Sixers never trailed again. The Clippers had a chance tie at the end, but Morris’ 3-point attempt bounced hard off the front of the rim.

Philadelphia dominated the game inside. The Sixers finished with a 46-43 rebound advantage, and they led the Clippers 21-6 in second-chance points and 34-28 in paint points.