Joe Musgrove, Padres out to end slide vs. Nationals 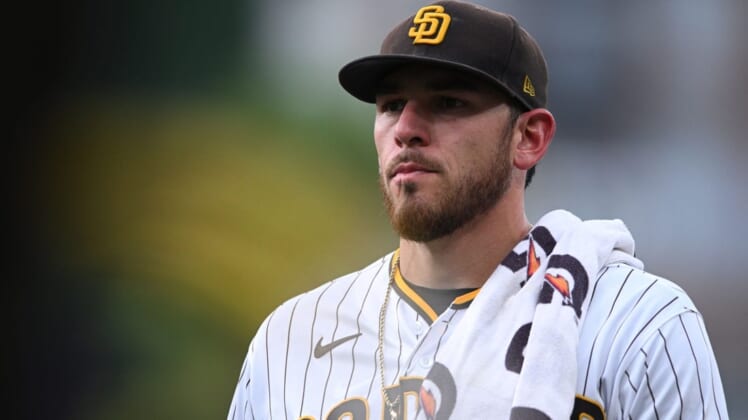 There was a time when Joe Musgrove was 8-0 and the San Diego Padres were 11-1 when the right-hander started games this season.

Six days after that long-ago Musgrove victory, the Padres reached their high-water mark of 17 games above .500.

Now, after losing two straight games to Washington at home, they are only 10 games over .500 heading into Saturday’s contest against the Nationals. And San Diego’s hold on the last wild-card spot in the National League is precarious at best.

“We certainly have the players to do more,” Padres manager Bob Melvin said Friday night after Washington scored three runs in the ninth inning off four-time All-Star closer Josh Hader in a 6-3 decision.

Hader, the major league leader in saves, was booed as he walked off the field following his second straight rough outing.

The Padres entered the four-game series Thursday thinking about a sweep that could ignite a late-season run. They go into Saturday’s game seeking to avoid losing the series.

Although Musgrove hasn’t been consistently as sharp as he was earlier in the season, he still has had five quality starts in nine outings since his last win. The Padres ‘inconsistent offense and bullpen have let him down several times, but his ERA has nearly doubled since it was 1.50 on June 10.

“Joe knows what he needs to do and he’s always working to improve himself,” Melvin said recently.

The overall numbers are still solid, including 129 strikeouts against only 28 walks in 133 innings. He did not face the Nationals in Washington last week and is 0-2 with a 6.86 ERA in five career appearances (four starts) against them.

As for Gray, the 24-year-old former second-round draft pick will be making his 23rd start of the season. He has recorded 137 strikeouts in 118 1/3 innings, however he has surrendered a major-league leading 31 homers.

Each of his past two starts came against the Chicago Cubs. Over 12 1/3 innings, he gave up five runs on 12 hits and two walks with 15 strikeouts. But the Nationals are only 3-8 in Gray’s past 11 starts.

“We haven’t consistently given him support,” Martinez said.

But Gray and Martinez might have had a come-together moment near the end of the pitcher’s outing against the Cubs on Monday. Martinez came to the mound in the sixth inning, and Gray stared at the manager as he approached.

“Gray looked at me and said, ‘Davey?'” Martinez said. “I said: ‘Hey, you don’t have to say a word. I just came out to give you a little breather. You’re going to finish this inning. You’re the right guy.”