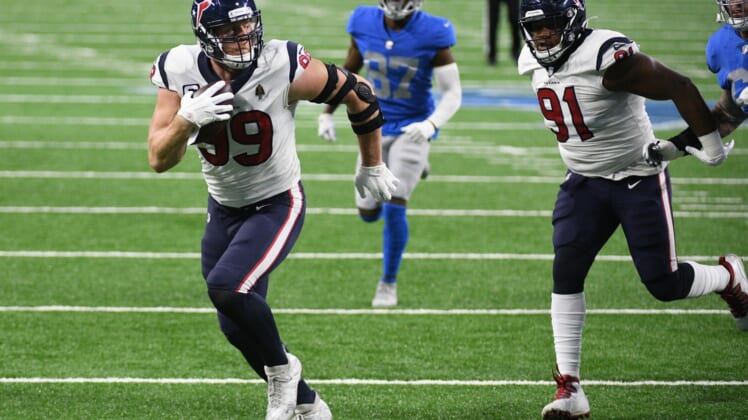 Houston Texans superstar JJ Watt celebrated Thanksgiving Day with a house call on Thursday against the Detroit Lions, intercepting Matthew Stafford and taking it to the end zone for a pick-six.

Watt has seen better days as a member of the Texans, as they entered Week 12 with a 3-7 record, but this first-quarter touchdown from 19 yards out is bound to lift his spirits, as Houston proceeded to roll to a 41-25 victory.

JJ Watt pulls off yet another pick-6

Known for getting his massive mitts into passing lanes for his entire illustrious career, Watt made a victim out of Stafford for his latest masterpiece, courtesy of The Checkdown:

The five-time, first-team All-Pro — wow that’s a lot of hyphens — has also won Defensive Player of the Year thrice, and was league sack champion in 2012 and 2015. While that super dominant era is over, Watt is still a force to be reckoned with, even if he’s not racking up the ridiculous sack totals he used to.

Whatever Watt has ever lacked in pass-rushing ability on any given snap, he can uniquely make up for with his knack for knocking the ball down. The 31-year-old entered Sunday with 60 career passes defensed in 122 games. This was the second INT for Watt in the regular season. That other occasion was back in 2014, when Watt intercepted a pass and took it 80 yards to the house.

Oh, and in the 2011 postseason, Watt recorded a 29-yard pick-six. This man is a machine. You can only hope to contain him in the open field once the ball is in his hands. Considering Watt is listed at 6-foot-5 and 288 pounds, it’s easy to understand why most players would make the business decision not to tackle him on as he rumbles toward the goal line.