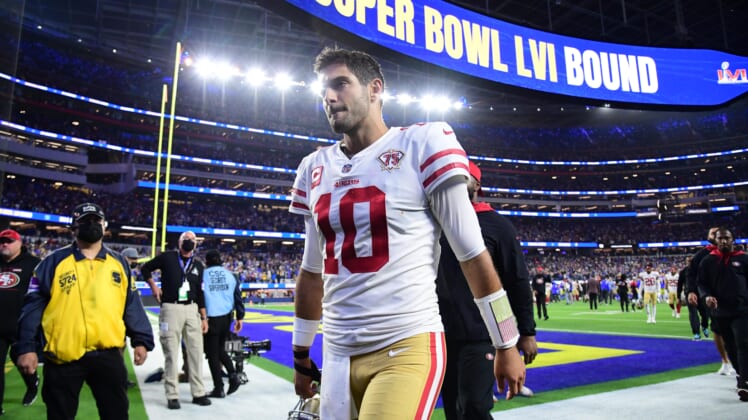 San Francisco 49ers quarterback Jimmy Garoppolo entered Sunday’s NFC Championship Game against the Los Angeles Rams with a 4-1 career playoff record as a starter. He led San Francisco to two dramatic road wins in the playoffs leading up to the game.

With Super Bowl LVI against the Cincinnati Bengals on the line, it sure looked like Garoppolo was going to lead his 49ers to a second big game in three seasons.

The 49ers found themselves up 17-7 after Garoppolo threw a touchdown to George Kittle late in the third quarter.

This would prove to be Garoppolo’s final touchdown of the season (and potentially in a 49ers uniform). San Francisco’s offense struggled to do anything of substance in the final stanza, culminating in this absolutely brutal interception from Garoppolo with the 49ers down 20-17 late in the fourth quarter.

You have to see the pick to believe it.

Sure it was desparation time with San Francisco facing 3rd-and-13 and boasting just one timeout. However, you can’t make that throw in the NFL. Jimmy Garoppolo legitimately threw it up for grabs behind his back. The pass was picked off by Rams linebacker Travin Howard to send Los Angeles to Super Bowl LVI.

A lot will be written over the next weeks and months about San Francisco’s season ending via another late-game meltown. A lot will be written about Garoppolo’s questionable future in Northern California after the 49ers traded up for Trey Lance in the first round of the 2021 NFL Draft.

For now, all eyes are on Garoppolo following a brutal fourth quarter performance. After all, he completed 3-of-9 passes for 30 yards with an interception in the final stanza. Garoppolo now has a 28 passer rating in the fourth quarter over the span of six playoff starts.

Jimmy Garoppolo throws game away, is blasted by NFL world