San Francisco 49ers linebacker Ahmad Brooks had a tough game in their season-opening blowout of the Dallas Cowboys on Sunday. And head coach Jim Harbaugh saw it firsthand on the sideline, eventually deciding to bench the linebacker at times.

The confusion (or split) between the two didn’t necessarily end after the whistle blew to indicate the end to a game that was pretty much decided by halftime.

As he is known for, Harbaugh offered up an interesting take on his team’s performance following the 28-17 victory (via Press Democrat).

There’s been a lot of rhetoric (about 49ers off-field issues) on a lot of different topics. A lot of opinion. This game was about steel in the spine. When it comes to 49ers players, that’s where they excel. They’ve got titanium in the spine.

In case you were wondering, titanium is less dense but as strong as most steels. So this is apparently in indication that he views the 49ers to have a strong spine for off-field rhetoric and what the media has covered in recent months.

But for Brooks, this statement didn’t make a lot of sense when posed with a question about Harbaugh’s comments. 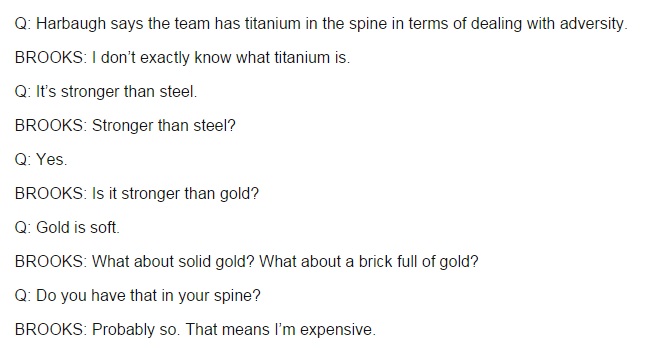 Reports that Harbaugh might be losing his locker room may be premature. But he sure does confuse them (and everyone else). Eccentric or just plain weird…that’s the Harbaugh we’ve come to know.