Teams have yet to formally request Jim Harbaugh interview

Not long after the Michigan Wolverines wrapped up their college football season, head coach Jim Harbaugh quickly became a popular name mentioned in this year’s hiring cycle in the NFL.

But one of the teams strongly linked to Harbaugh, the Las Vegas Raiders, have since made the playoffs under Rich Bisaccia who is performing his duties as the interim head coach. Now the general feeling is the interim tag may not stick around much longer, with the team hiring him full-time to take over after Jon Gruden’s resignation.

This might have thrown a wrench in Harbaugh’s plans, leaving him without an NFL team vying for his services. According to Mike Florio of Pro Football Talk, none of the eight teams with a current head coach opening have requested an official interview with Harbaugh just yet, despite the early rumored interest.

Or, it’s possible Harbaugh never had any plans to leave Michigan, or at least not yet. Before the year began Harbaugh took a pay cut. Then, he made everyone at the university happy by taking down Ohio State, his Big Ten rivals.

Now he could just be posturing to recoup some of the salary he handed back in the form of a pay raise or extension, using the NFL as more leverage, as we’ve seen from several college coaches before him. If he does want to leave Michigan after seven seasons, so far teams haven’t been too forward about their interest.

At the same time, there are still three teams that need to hire a general manager, who then will start conducting interviews for the franchise’s next head coach. One of them includes the Chicago Bears, who’ve also been loosely linked to Harbaugh in the past few weeks. It could be that the market on Harbaugh has yet to heat up. 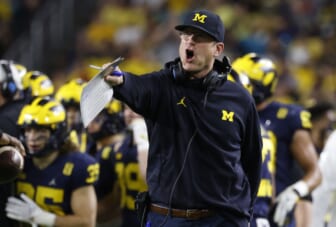