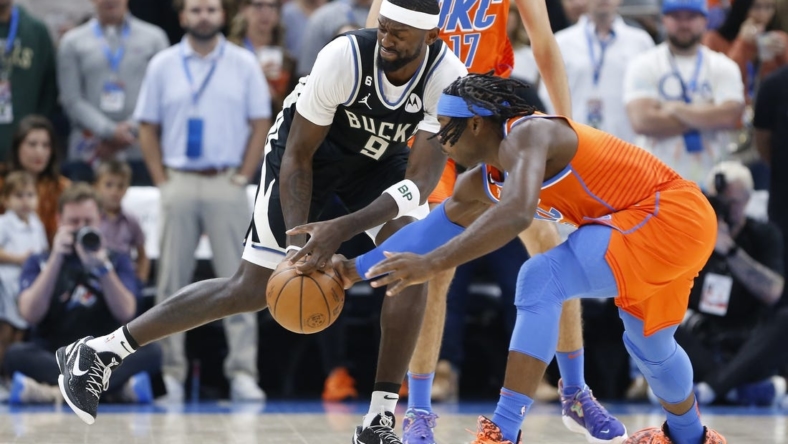 Jevon Carter scored a career-high 36 points to lead the Milwaukee Bucks to a 136-132 double overtime victory over the host Oklahoma City Thunder on Wednesday.

Carter hadn’t scored more than 21 in a game since his rookie season of 2918-19. He added 12 assists on Wednesday, easily topping his previous career high of nine.

The Bucks were without both Giannis Antetokounmpo (left knee soreness) and Jrue Holiday (right ankle sprain). Still, Milwaukee bounced back two days after taking its first loss following a 9-0 start to the season.

Milwaukee’s Grayson Allen scored four of his 18 points in the second overtime, all free throws on back-to-back possessions in the closing seconds to help the Bucks stretch their lead to six and finally put the game away.

Shai Gilgeous-Alexander led the Thunder with 39 points on 13-of-25 shooting. Tre Mann added 21 points off the bench.

After Bobby Portis’ layup with 8.1 seconds left in the first overtime put the Bucks up 125-123, Gilgeous-Alexander answered in a big way.

Gilgeous-Alexander nailed a step-back 3-pointer with 1.2 seconds left to seemingly seal the game for the Thunder.

However, Luguentz Dort fouled Lopez on a lob try, and it looked as if it would be the Bucks who would pull off the win. But Lopez missed the first free throw before making the second to force a second overtime.

The Bucks led 112-100 with five minutes left in regulation before Gilgeous-Alexander scored 10 of Oklahoma City’s next 13 points to fuel a 19-7 run to end the fourth and send the game into overtime.

Dort’s dunk in the final minute tied it.

Lopez and Carter had chances to give the Bucks the win after Dort’s shot, but both shots missed the mark.

In the opening minute of the second quarter, Oklahoma City’s Darius Bazley went down with a sprained right ankle. Bazley did not return.