The New York Jets have made no secret of wanting to meet with practically every quarterback prospect in this year’s draft. That’s not good news for third-year passer Geno Smith, whose career in New York began with a whimper and, if recent reports prove true, could end with a thud.

Smith, the Jets’ second-round pick in the 2013 draft, has completed 466 of his 810 career pass attempts—or 57.5 percent—for 5,571 yards, 25 touchdowns and 34 interceptions. His 2014 season was marked by a game against the Buffalo Bills in which he posted a quarterback rating of 0.0, and another to close the season against the Miami Dolphins in which he had a perfect, 158.3 rating.

ESPN’s Rich Cimini, citing sources close to the Jets, reported on Sunday that New York general manager Mike Maccagnan “hasn’t ruled out” trading up for a quarterback in this year’s draft, while Bleacher Report NFL insider Jason Cole reported on Monday that the Jets “want to move on” from Smith, who is “not the guy.” 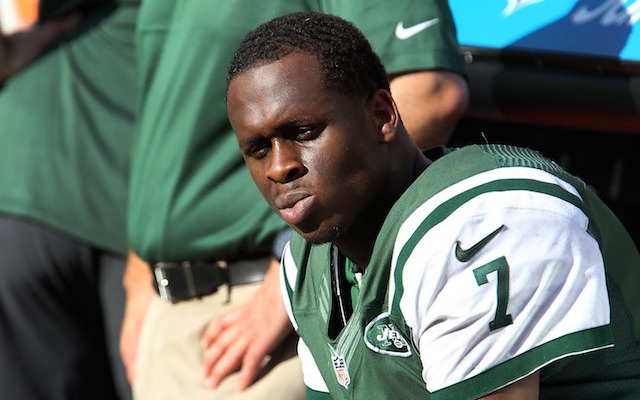 Courtesy of USA Today Images: Smith doesn’t seem to be the answer in New York.

It makes sense that the Jets would be willing to move on so soon from Smith, granted that neither Macagnan nor head coach Todd Bowles had any hand in his selection two years ago and granted that Smith has not shown steady improvement from Year 1 to Year 2.

With the Jets picking sixth-overall in Round 1 of the draft, they would not have to package much ammunition to move up, even to the No. 2 spot currently controlled by the Tennessee Titans. There is also the possibility, should they not be able to or want to move up, that they select another quarterback prospect with a later pick, such as UCLA’s Brett Hundley or Baylor’s Brice Petty, two passers the Jets have already met with or plan to meet with in the coming days.

Either way, it appears that Smith is not long for the Jets’ roster. Such is the peril of being a young, incumbent quarterback on a team with new coaching and front office staffs. It’s not so much that Geno isn’t “the guy,” more than he’s simply not Maccagnan’s and Bowles’ guy. Sometimes, that’s all it takes to go from being on top of a depth chart to looking for employment elsewhere.