Jets storm back to beat Kraken in season finale 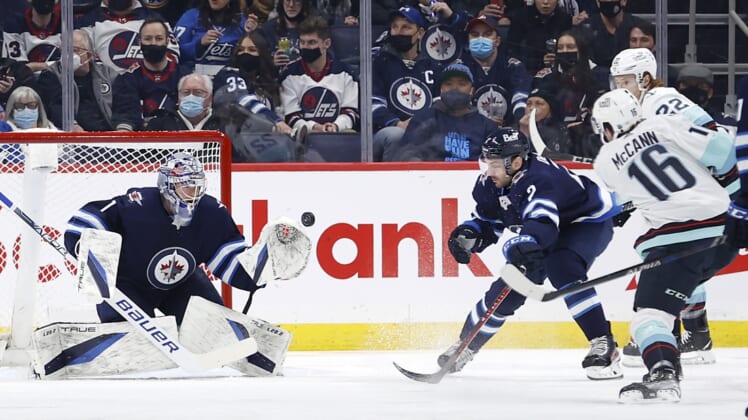 The game, a makeup of an April 13 contest postponed by a snowstorm, was the finale of the NHL’s regular season.

Morgan Barron, Blake Wheeler and Dominic Toninato also scored for the Jets (39-32-11, 89 points) who, despite missing the playoffs for the first time in five years, finished with a four-game winning streak. Jansen Harkins collected two assists and goaltender Eric Comrie made 27 saves.

Alex Wennberg, Daniel Sprong and Riley Sheahan scored for the Kraken (27-49-6, 60 points), who blew a two-goal lead for the fourth time in their past six games. Chris Driedger stopped 23 of 27 shots.

Trailing 3-1 entering the third, the Jets scored thrice in a span of 4:16.

Wheeler pulled the Jets within a goal at 4:49 on a one-timer from the top of the right circle after a faceoff win by Paul Stastny.

Toninato tied it at 7:16, also on a one-timer from the top of the right circle, after a cross-ice pass from Harkins.

The Jets got the winner at 9:05 as Pierre-Luc Dubois dug the puck out of the left-wing corner and found Connor in the slot. He beat Driedger with a quick shot between the pads.

The Jets opened the scoring at 3:47 of the first period. Barron intercepted a pass by Seattle rookie Matty Beniers just inside the defensive blue line and passed ahead to Harkins to start a two-on one rush. Barron took a return pass and lifted a shot over Driedger’s shoulder.

The Kraken tied it at 5:56 of the second period on the power play. Beniers controlled the puck along the right-wing boards and sent a cross-ice pass to Jared McCann, who slid the puck back across the crease to Wennberg at the right post for an easy tap-in.

Sprong gave the Kraken a 2-1 lead at 12:24. Derrick Pouliot’s pass from the left point found Sprong skating down the slot alone, and he lifted the puck over Comrie.

The Kraken extended the lead to 3-1 just 55 seconds later. Wennberg drove the puck down the left wing and centered a pass that went off a defenseman’s stick and to Sheahan near the right post for a one-timer.