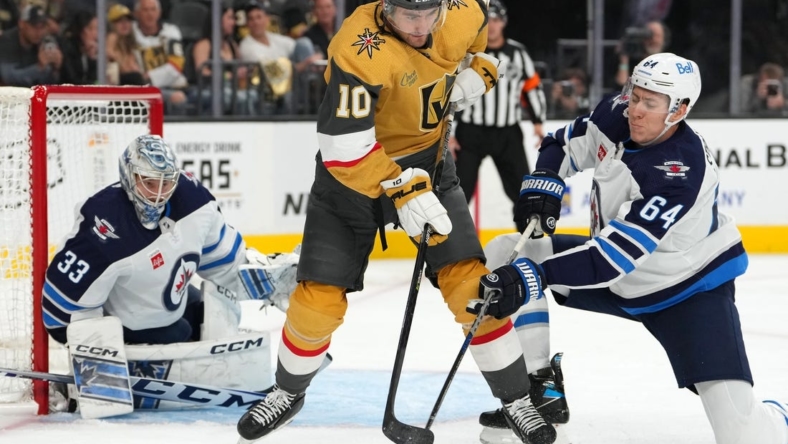 The Winnipeg Jets and Vegas Golden Knights will both put three-game winning streaks on the line when they meet late Sunday afternoon in Las Vegas.

It will be the second meeting in an 11-day span between the teams. Vegas, jumping out to a 4-0 first-period lead that featured a pair of goals by Jack Eichel, won the first one 5-2 on Oct. 20 in Vegas.

The Golden Knights, who lead the Pacific Division with a Western Conference-best 14 points, seem to have bought into a more defensive-oriented system brought in by new head coach Bruce Cassidy.

Entering Saturday, Vegas led the NHL with a 1.78 goals-against average and has allowed two goals or fewer in six of its nine games. The Golden Knights also lead the Western Conference with a plus-13 goal differential. And rookie goaltender Logan Thompson, who made 29 saves in a 4-0 victory over Anaheim on Friday, owns two shutouts.

Thompson sports a 1.69 goals-against to go along with a sparkling .943 save percentage. He credited his teammates for playing a big part in his good start.

“That’s a team win,” Thompson said. “Our team defense, as a forward group and a D corps, it’s been perfect all year. They’re making our jobs easy. We’re seeing a lot of pucks. The stuff we don’t see, they’re getting in the way and blocking them.”

Cassidy said he has been pleased with how quickly his team has adapted to its new system.

“You never know how it will be until it’s received by the players,” Cassidy said. “What I’m seeing is that it’s become more natural. They’ve grasped the concepts and we’re clogging the middle and getting our D closer to the net. … We want our reputation around the league to be that of when you come into (T-Mobile Arena), you’re not going to get much.”

Winnipeg will be finishing a three-game, four-day western road trip that began with a 6-4 victory at Los Angeles on Thursday. That was followed by a 3-2 overtime win over Arizona in its home opener at new Mullett Arena in Tempe, Ariz., on Friday.

The Jets rallied from early 2-0 deficits to win both games. Blake Wheeler scored 32 seconds into OT to win Friday’s contest against the Coyotes. Rookie Cole Perfetti and Mark Scheifele, who is top five in the league with six goals, also scored.

“We stuck with it,” Wheeler said. “We played last night in L.A. and we knew those first periods are always tough. The fact it was still a game, and (David Rittich) made some big saves back there for us to keep us in it … you have a chance to win. That was mission accomplished.”

It was just the second start of the season for Rittich, who finished with 19 saves. His first was in Las Vegas when he stopped 31 of 35 shots despite falling behind 4-0 in the first 15:17.

“We didn’t do a very good job of supporting him in his first start in Vegas,” said associate coach Scott Arniel, filling in for head coach Rick Bowness, who didn’t make the trip while still recovering from COVID-19. “Even tonight, we got down two but he was rock solid. Needed to be. It was so good to see him get his first win as a Winnipeg Jet.”