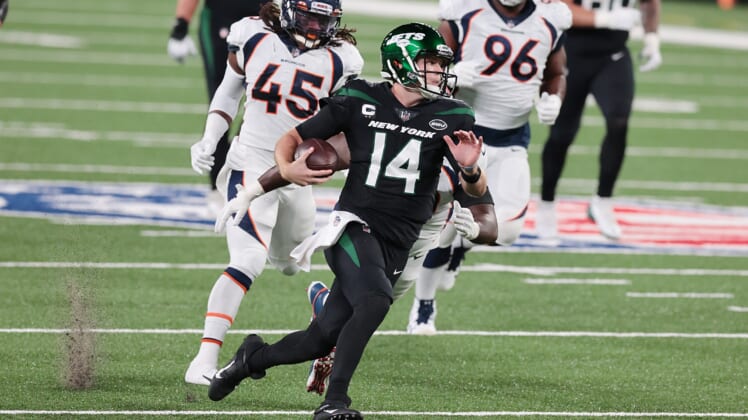 New York Jets quarterback Sam Darnold delivered one of his best performances of the season on Thursday Night Football, but a shoulder injury suffered during the game may now sideline him for Week 5.

During Thursday’s game against the Denver Broncos, Darnold was slammed into the turf at MetLife Stadium. The 23-year-old was in obvious pain after the shoulder injury and went into the locker room.

While he returned in the Week 4 game, after being diagnosed with a shoulder sprain, Darnold is now in jeopardy of missing Week 5 against the Arizona Cardinals.

NFL Week 5: Schedule and predictions for every game

Even after a few extra days to recover, Darnold is reportedly still dealing with some pain in his throwing shoulder following the injury. While he still has two additional days before practice, things aren’t looking promising for his availability.

According to NFL Network’s Ian Rapoport, the most likely scenario is Darnold misses Sunday’s game against the Cardinals. While the Jets want to see how he feels at practice on Wednesday, with the emphasis being on his ability to throw, there is a real chance the injury is too significant to play through.

It couldn’t come at a worse time for Darnold and the Jets. He threw for 230 yards against Denver’s defense and rushed for a career-high 84 yards, including this crazy touchdown run.

While his 70.5 quarterback rating and 54.8% completion rate still left plenty to be desired, it was at least an improvement from his three-interception performance in Week 3.

In a surprise to many, the Jets didn’t fire Adam Gase following the 0-4 start to the season. His job in New York appears to be safe, but the countdown to his termination will accelerate if New York drops to an 0-5 record.