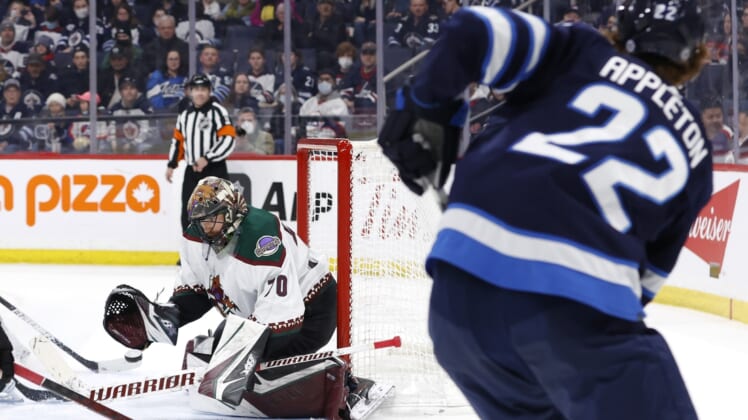 Mark Scheifele’s second goal of the game was the overtime winner that gave the host Winnipeg Jets a much-needed 2-1 victory over the struggling Arizona Coyotes on Sunday.

Goalie Connor Hellebuyck made 28 saves for the Jets, who blew third-period leads in consecutive outings but managed to pull off an extra-time win in them both.

Scheifele’s goal with 9.7 seconds remaining in overtime couldn’t have come at a better time. Captain Blake Wheeler won a board battle to gain the puck and he sent Scheifele for a breakaway that he converted to net his 26th goal of the season.

The Jets, who have won six of eight games, are two points behind the Vegas Golden Knights for the final wild-card spot in a tight Western Conference race. Winnipeg also has a game in hand on the Golden Knights.

Scheifele opened the scoring with just 14 seconds remaining in the first period. Taking advantage of a Coyotes neutral-zone turnover, Scheifele headed to the net after passing to Paul Stastny on the wing. Vejmelka stopped the long offering, but the puck ricocheted off Scheifele’s stick and into the net.

With his team in need of a boost, Ritchie’s ninth goal of the season — and seventh in 14 games since being traded to the Coyotes — provided it 6:17 into the third period. Cam Dineen’s wraparound attempt was denied, but Ritchie found the loose puck in the ensuing chaos and tapped it home.

The Coyotes came within inches of winning in overtime, but Shayne Gostisbehere’s shot rang off the post.

Arizona forward Phil Kessel played his 965th consecutive game, which puts him into second on the all-time list behind Keith Yandle of the Philadelphia Flyers.