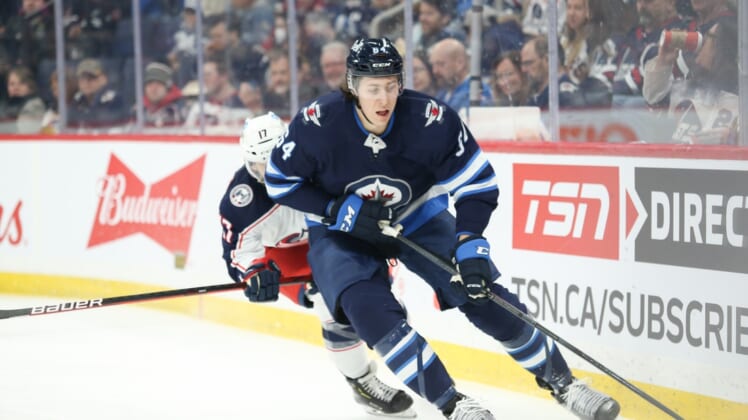 Having won five of seven games, the Winnipeg Jets have pulled themselves back into the playoff chase.

However, as they prepare to host the Arizona Coyotes on Sunday, the Jets are well aware of the task ahead. With 16 games remaining in the regular season, the Jets are trailing Dallas and Vegas in the hunt for the last wild-card spot in the Western Conference.

There’s a lot of hockey left, but to punch a ticket to the playoffs, the Jets figure to need to go on a pronounced run.

That’s why they can’t waste the opportunity to claim two points from the last-place Coyotes. Winnipeg’s 4-3 overtime victory over the Columbus Blue Jackets on Friday was a big step forward after its disappointing 5-2 defeat to the Ottawa Senators the previous night.

“Sometimes … when you don’t like performances, you have a game the very next day,” defenseman Josh Morrissey said. “Everyone left the rink with a bit of a sour taste in our mouths (Thursday) night. … We knew what we needed to change.”

Not that it was easy beating the Blue Jackets. Winnipeg surrendered a late goal but won when Nikolaj Ehlers scored 21 seconds into overtime.

The Coyotes arrive on the heels of Friday’s 4-2 loss to the Calgary Flames that kicked off a three-game trip. Arizona has lost four straight games, all in regulation.

The Coyotes were the better team through the first period in Calgary but had no answer when the Pacific Division-leading Flames kicked their game into another gear.

“We had a game plan, and we executed it in the first period,” said forward Jay Beagle, who returned to the lineup after missing 36 games due to a lower-body injury that required surgery in early January.

“During the first intermission we knew they would raise their game. Calgary gets better as the game gets going.”

Even though the Coyotes are already on the verge of playoff elimination, they showed in Calgary that they can still bring energy to the ice.

“The way we battled and the pride our players showed and the competitiveness throughout 60 minutes, I’m proud of them,” coach Andre Tourigny said. “I’m happy about the way we played.”

Indicative of where the Coyotes are in their rebuilding efforts, two more players — forward Michael Carcone and defenseman Vladislav Kolyachonok — netted their first career goals. In total, five players have scored their first NHL goal this season for the young squad.

Carcone, a 25-year-old winger with 333 American Hockey League games over six seasons under his belt, is looking to push his way to being a NHLer. His tally, coming in his fourth NHL game, was a much-needed positive.

“It was a special moment scoring my first goal,” he said. “You dream about it as a kid, and when it finally happened it’s pretty surreal.”