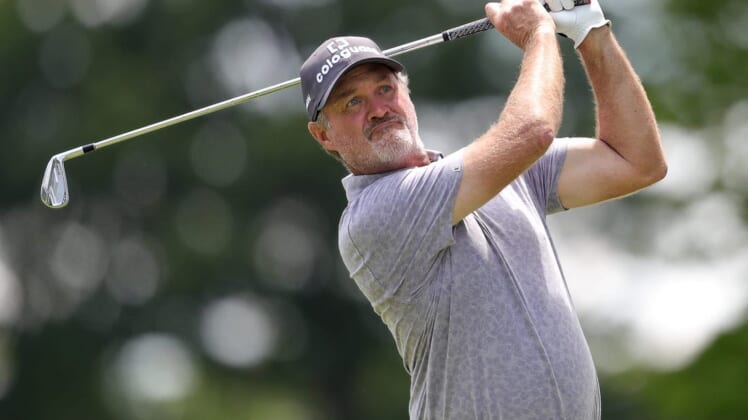 Jerry Kelly shot a 5-under 65 on Saturday and is tied for the lead with Alex Cejka after three rounds of the Bridgestone Senior Players Championship at Akron, Ohio.

Kelly carded six birdies and one bogey in his stellar round while Cejka shot 67 on Firestone Country Club’s South Course. Both men are at 9-under 201 entering Sunday’s final around.

“Not trying to do too much with my iron shots, just giving myself good looks,” Kelly said of his round. “And then the putter was better today, made a couple good up-and-downs. Just one three-putt out there … but overall everything was just kind of smooth.”

Cejka, the Czech-born German, finished with a flourish with four birdies over the final five holes. Overall, he had six birdies and three bogeys.

“It’s great to finish strong,” Cejka said. “I played pretty good all day long, but had a terrible start, made two stupid bogeys. Had a lot of good chances, couldn’t make a putt with great shots. It’s frustrating.”

Defending champion Steve Stricker (68 on Saturday) and New Zealand’s Steven Alker (69) are tied for third, two shots back. South Africa’s Ernie Els (69) is alone in fifth at 6 under.

Kelly is seeking his second career major title on the PGA Tour Champions. The first came in this event in 2020.

He will be keeping both eyes on the scoreboard before and during Sunday’s final round.

“I want to know if anybody has passed us before we tee off,” the 55-year-old Kelly said. “I want to know where everybody is all the time. I’m a complete 1,000 percent scoreboard watcher. It motivates me to make more birdies to catch up.”

“This is up and down, tough holes,” Cejka said of the course. “You’ve got to really play with your brain a little bit and execute the shots. You need a good strategy and execute your shots and that’s what I’ve been doing.”

Stricker is in position to make a run at his second major victory of this season — he won the Regions Tradition in May — and fifth of his Champions career.

The 55-year-old had four birdies and two bogeys. The latter bogey on the par-4, No. 18 prevented him from being one shot back of the co-leaders.

“Only two shots back and a lot of golf left,” Stricker said. “Eighteen holes around here, you can make up ground in a hurry, so that’s kind of what I need to do tomorrow.”

Alker won the Senior PGA Championship in late May for his first career major win. The 50-year-old is in position for another win despite a bumpy round on Saturday. He made five birdies but hurt himself with four bogeys.

Els had three birdies and two bogeys on Saturday.

Cameron Beckman joined Kelly and Choi in shooting round-bests 65. Beckman is tied for 10th at 4 under with Shane Bertsch (68) and Woody Austin (71).