Jerry Jones usually exists in a world all by himself. And no, I don’t mean “Jerry’s World” in Arlington. The Dallas Cowboys owner has consistently come up with some of the most ridiculous quotes around the football world over the years.

Speaking about what the Cowboys might do this season and how they are viewed around the NFL, Jones had this to say (via Star-Telegram).

I think we’ve shown some things that would cause you to hold in discounting us,” Jones said on his weekly radio show on KRLD-FM. “That’s an awkward way of saying that we should be looked at out of the corner of peoples’ eye. We’ve got to do it, though. We’ve got to put it together, with putting the right people on the field as it relates to injury, and that’s happening for us.

Get [Justin] Durant back in there, get [Rolando] McClain back at linebacker. Now, all of a sudden we’ve got about three or four players out there that arguably are the best defensive players that we hadn’t had the last two or three games. That’s a big deal. And if we’re that, then I think [Tony] Romo’s certainly getting his timing down. I like the experience our offensive line is getting and has gotten in these three games. Yes. Yeah. We need to be glanced at over here.

There may be something to this. At 2-1, the Cowboys have an opportunity to show to the football world that they are for real against the New Orleans Saints on Sunday Night. With that said, recent history suggests this team will fall flat on its face in front of a national audience. We saw it last year against these very same Saints when the Cowboys lost 49-17 on Sunday Night Football in Week 10. A few weeks later and riding a two-game winning streak, Dallas again fell flat on its face against the Chicago Bears on Monday Night Football by the score of 45-28.

It’s these types of performances that have defined the Cowboys over the years. And with another opportunity to prove skeptics wrong this weekend, Jones seems to think the team can play at a high level. 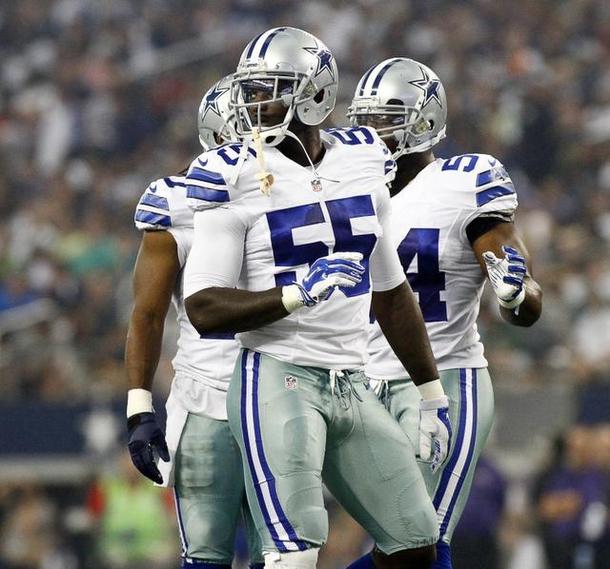 Courtesy of Star-Telegram: McClain and Co. will have their hands full Sunday night.

The issue here is that Jones seems to be relying on defensive players that just haven’t gotten it done in the past. Anthony Spencer is a shell of his former self and is playing out of position at defensive end. Justin Durant has never been a starter-caliber linebacker. And despite playing pretty good football right now, there are still question marks surrounding Rolando McClain. This doesn’t even take into account horrendous safety play and a cornerback in Morris Claiborne that seems to have “bust” written all over him.

If the Cowboys are going to step up and win on Sunday night, it’s going to be on their offense. That’s where the focus needs to be against a Saints defense that’s playing some bad football right now.