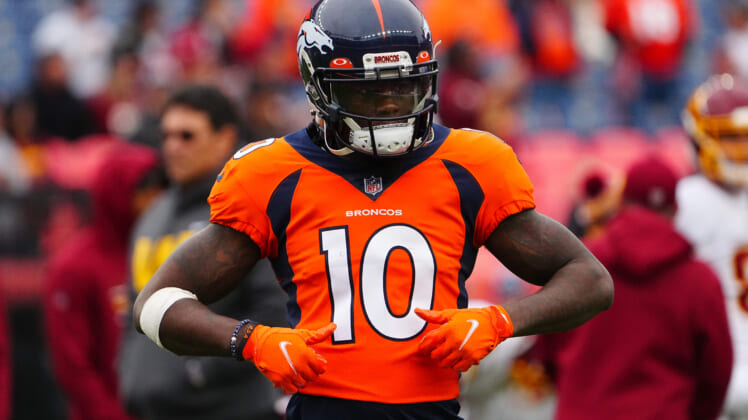 A day after Denver Broncos wide receiver Jerry Jeudy was arrested and charged with second-degree criminal tampering with a domestic violence enhancer, he is now out on bond with his alleged victim coming to his defense.

Jeudy, the 15th pick in the 2020 NFL Draft, was brought into custody by law enforcement Thursday afternoon in Arapahoe County. Following his arrest, police announced he would be held without bail until making a court appearance.

Jeudy appeared in court with the mother of his 1-month-old child on Friday morning, per TMZ Sports. During his appearance in front of the judge, the woman reportedly asked the judge to dismiss the case against Jeudy.

According to police, Jeudy was accused of illegally withholding property from the woman before law enforcement was called. Due to the domestic relationship and Colorado law, he was immediately arrested and booked into jail.

On Friday, per KOA’s Benjamin Allbright, the judge found no evidence to suggest the use of physical force by Jeudy. The alleged victim also did not request a no-contact order against the NFL receiver. Harvey Steinberg, who represents Jeudy, told reporters he doesn’t believe his client should have been arrested.

A personal recognizance bond was set for Jeudy at $1,5000 and he was released following his court appearance. The victim also requested the judge dismiss the charges against the Broncos’ receiver.

Jeudy’s next scheduled court date is set for May 31.