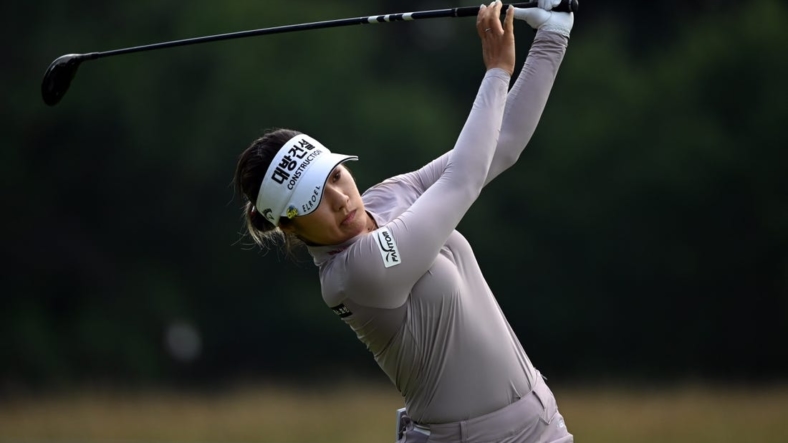 Jeongeun Lee6 of South Korea fired the round of the day, a 9-under-par 63, on Friday to rocket into the lead after two rounds of the inaugural Kroger Queen City Championship in Cincinnati.

Lee6 rolled in nine birdies without a bogey at Kenwood Country Club to get to 13-under 131 through two rounds, one shot better than China’s Xiyu Lin, who shot 68 Friday. Ally Ewing was in third at 11 under after a 64.

“(At) hole 8 I thought just 7-iron was right, but my caddie said 8-iron was good, so I want to say thank you to my caddie,” Lee6 said with a laugh.

Lee6’s only win on the LPGA Tour came at the 2019 U.S. Women’s Open, but she’s won six times in South Korea. She said she’s been spending time “fixing” her swing.

Lin led the tournament after a first-round 64. She had a bogey-free round on Friday but holed just four birdies.

“The golf tournament doesn’t finish in one day, so I kind of told myself I have to keep going today,” Lin said. “This course, like everybody has a chance and it is what it is. Like perfect example today, like (Lee6), she just had a fabulous day and shoot 9 under.”

Ewing started her round on the back nine, but the highlight of her day came after she made the turn. She strung together six birdies in a row at Nos. 2-7 for a late surge up the leaderboard.

It started inauspiciously, as she missed her approach into the second green.

“It’s really funny. On hole 2 I hit a wedge shot fat and then I chipped in for birdie,” Ewing said. “So it was kind of — to start the string that way was — it was going from needing to get a ball up and down for par to an unlikely birdie. Then I just executed some really good shots coming in. I hit some close, made a couple of putts around 20 feet that kind of kept the string going.”

The 29-year-old is contending for her third LPGA victory and her first since the LPGA Match-Play in 2021.

Minjee Lee of Australia followed Thursday’s 76 with a 69, but it wasn’t enough for her to make the cut of 1 under. Lee, who went 1 over through two days, leads the Race to the CME Globe points race and was the highest-ranked player in the field (No. 3 in the world).