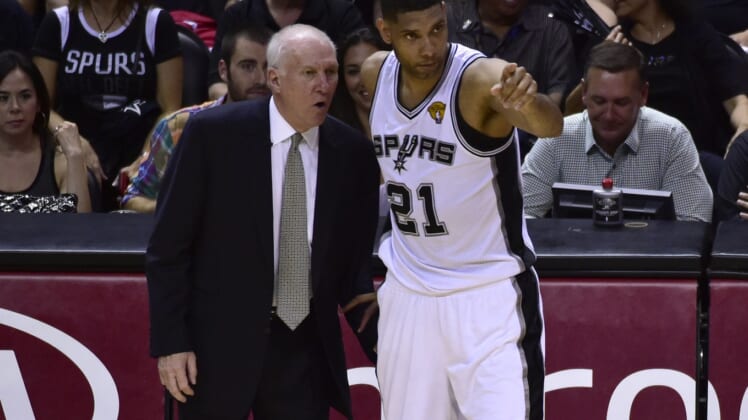 San Antonio Spurs legend Tim Duncan is nearing the end of his career, and analyst Jeff Van Gundy thinks the future Hall of Famer is capable of occupying a new role: NBA coach.

In an interview on ESPN Radio, JVG—who compiled a 430-318 record during 11 seasons as a coach—offered a few reasons for why Duncan has a future leading a team. Van Gundy said:

“I watch him and his interactions; I think he knows people, I think he knows how to help unite and inspire a group. I watch how he has gracefully passed the torch on to a different type of game over the last six, seven years there, transitioning into more of a pick-and-roll movement game rather than featuring him.”

Should Duncan ultimately choose to follow that path—one in which he’s never publicly expressed interest—he’d be able to build on experiences with one of the greatest coaches in NBA history.

However, Pop’s always quick to remind the audience that his success is a direct result of Coach Duncan being on the floor.

Coach Pop reveals the secret to the @Spurs' 5 championships (via @NBA).https://t.co/IcYRN7yAsd

The 2015-16 campaign will be Duncan’s 19th and perhaps final season. Once he officially retires, Duncan might be mentioned as someone who should be contacted in regards to a coaching vacancy.

At that point, Duncan can decide if he wants to follow in the footsteps of Jason Kidd and Derek Fisher, two former All-Stars who immediately entered the head-coaching ranks after stepping off the court.