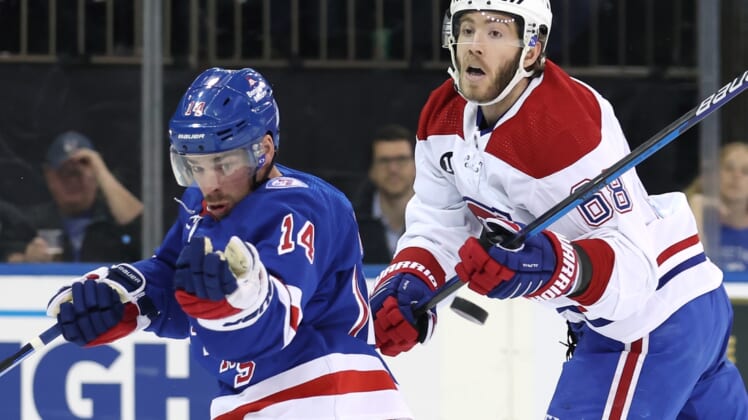 Petry scored in the final minute of the second period before firing a shot over the glove of Alexandar Georgiev to cap his seventh career two-goal game and his first since he scored twice against the Vancouver Canucks on Feb. 1, 2021.

Ryan Poehling scored in the first and Mike Hoffman scored in the third for the Canadiens (21-49-11, 53 points), who at least temporarily climbed out of sole possession of last place in the NHL. The Arizona Coyotes had 53 points entering their game against the Dallas Stars Wednesday night.

Goalie Sam Montembeault made 24 saves for the Canadiens.

Ryan Reaves, Frank Vatrano and Ryan Strome all scored for the Rangers (51-24-6, 108 points), who overcame a trio of one-goal deficits before losing for the third straight time.

New York, which scratched its four leading scorers — Artemi Panarin, Mika Zibanejad, Chris Kreider and Adam Fox — on Wednesday, is locked into second place in the Metropolitan Division and a first-round date next week against either the Pittsburgh Penguins or Washington Capitals.

Poehling scored with 1:15 left in the first before Reaves tied the score 4:14 into the second, when his shot glanced off the glove of Montembeault as he was surrounded by four teammates.

Petry gave the Canadiens the lead again just before the second-period horn. Christian Dvorak chipped a pass off the boards behind the Rangers’ net to Petry. He shuffled the puck behind and in the back of the left faceoff circle before firing a shot that sailed off the top of the post and into the net as Georgiev was screened by Montreal’s Josh Anderson.

Barclay Goodrow picked up the puck after Canadiens defenseman Alexander Romanov overran it in the neutral zone before dishing to Vatrano, who raced in untouched for the tying goal 4:15 into the third. Hoffman capped an end-to-end rush to give Montreal the lead with 7:52 left before Strome tied it with a short-handed goal with 4:19 remaining.