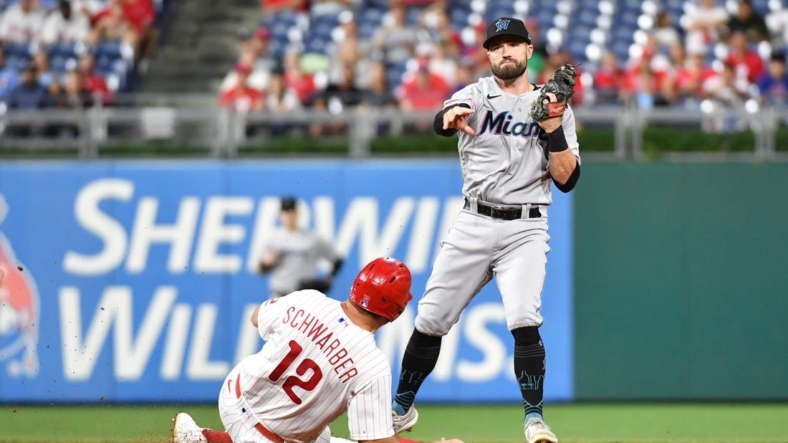 Jean Segura hit a walk-off RBI single off Tommy Nance with one out in the bottom of the ninth inning to lift the host Philadelphia Phillies past the Miami Marlins 3-2 on Tuesday.

Bryce Harper hit a bloop double to left with one out in the ninth and scored on Segura’s eighth career walk-off hit.

Edmundo Sosa hit a solo home run and a double and Alec Bohm had a sacrifice fly and an RBI for the Phillies (74-61), who snapped a three-game losing streak.

Phillies starter Aaron Nola tossed 6 2/3 innings and allowed four hits and one run with 10 strikeouts and two walks. Nola reached 200 strikeouts for the season for the fourth time in his career.

David Robertson (4-2) pitched a scoreless ninth to earn the win.

Brian Anderson led the Marlins with a single, a sacrifice fly and two RBIs while Miguel Rojas contributed two hits. The Marlins (55-79) have dropped eight in a row.

The Phillies went ahead 1-0 in the third inning when Sosa lofted a solo homer to left field, his first of the season.

Joey Wendle opened the fourth with a double to right for the first Marlins hit. Anderson followed with an RBI single to tie the game at 1.

With steady rain falling, Nola retired the Marlins in order in the sixth.

Sosa doubled down the right field line to begin the bottom of the sixth. Kyle Schwarber popped out to first, but Sosa advanced to third on a wild pitch by Luzardo. Rhys Hoskins then walked and Sosa was initially thrown out at home by left fielder Anderson when trying to score on a sacrifice fly by Bohm.

After a challenge, the umpires overturned the call, saying catcher Nick Fortes violated the home plate collision rule, and the Phillies took a 2-1 advantage.

JJ Bleday walked with two outs in the seventh and Nola was lifted for Jose Alvarado. Rojas struck out swinging for the third out.

The Marlins placed runners at second and third with one out in the eighth and Anderson came through with a sacrifice fly to even the game at 2.