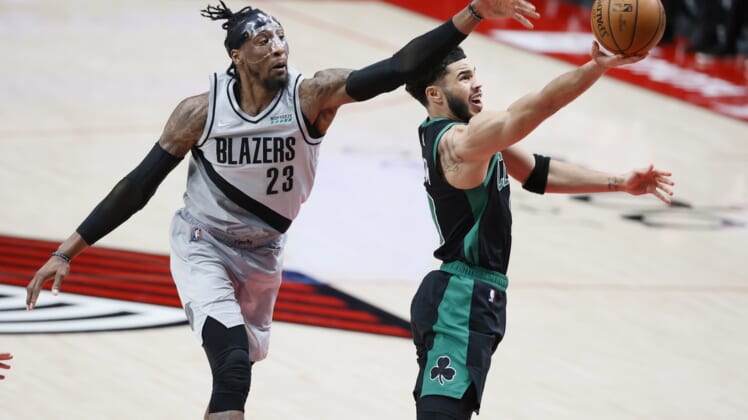 Jayson Tatum recorded 32 points, nine rebounds and five assists to lead the Boston Celtics to a 116-115 victory over the host Portland Trail Blazers on Tuesday night.

Damian Lillard posted 28 points and 10 assists, and Carmelo Anthony scored 25 points on 10-of-15 shooting for the Trail Blazers. Norman Powell added 20 points and CJ McCollum had 16 points as Portland lost for the fifth time in the past seven games.

Tatum made two free throws to give the Celtics a 113-112 advantage with 40.4 seconds to play. Lillard missed a shot for Portland with 33.2 seconds left before Tatum nailed a clutch 3-pointer with 7.8 seconds remaining to give Boston a four-point lead.

Lillard got the rebound but since Portland was out of timeouts, there was nothing he could do but throw an 80-footer that was well wide of the mark.

Portland connected on 47.8 percent of its shots and was 17 of 43 from behind the arc.

Lillard hit a 3-pointer to start a 7-0 run as the Trail Blazers crept within 107-106 with 2:49 left. Robert Williams scored in the interior to put the Celtics up by three before Lillard drained another trey to tie it at 109 with 2:03 remaining.

Robert Williams converted a layup to give Boston a 111-109 lead with 1:42 remaining. McCollum answered with a 3-pointer with 1:01 left to five the Trail Blazers a one-point edge.

Powell scored 15 first-half points, including the tiebreaking 3-pointer with 19.8 seconds remaining to give Portland a 60-57 lead.

Portland took an 85-82 lead on Enes Kanter’s three-point play with 2:54 remaining in the third quarter before the Celtics finished the quarter with a 10-2 push to lead 92-87 entering the final stanza.