Considered one of the best prospects in the 2017 NBA Draft after a stellar one season at Duke, it stood to reason that Jayson Tatum would end up with a heralded NBA franchise.

The Philadelphia 76ers had traded up to the No. 1 spot immediately leading up to the draft. In said deal, the Boston Celtics moved down to the third spot. Sitting in between them was Tatum’s childhood team in that of the Los Angele Lakers selecting at two.

There was no real chance that Tatum would land outside of the top three. He was going to head to an historic NBA franchise that had fallen on hard times.

For Tatum, the idea of playing for the Lakers was just almost surreal. He had a real chance to play for a team he grew up rooting for. One of millions of American children who idolized the now late-great Kobe Bryant.

It never came to fruition. Philadelphia landed Washington guard Markelle Fultz with the first selection. Led by Sam Hinkie, Fultz seemed to be a better fit for a 76ers squad that was building around Joel Embiid and Ben Simmons.

As for the Lakers, front office head Magic Johnson grew enamored with UCLA guard Lonzo Ball at two. That led to Tatum falling to the Celtics with the third selection.

How little did the Lakers think of Tatum at the time? They never even brought him in for a pre-draft workout. Obviously, that still stings about five years after the fact.

Related: Jayson Tatum and the top-10 players in the 2022 NBA Finals

The Lakers were coming off an ugly 26-56 performance in their first season following Bryant’s retirement. They needed to find a franchise cornerstone. The powers that be, individuals who are no longer with the organization, believed Ball would be the guy.

It didn’t work out for either side. Ball played in 99 games with the Lakers before being dealt to the New Orleans Pelicans in the Anthony Davis blockbuster ahead of the 2019-20 season.

As for Philadelphia, it took Fultz with the second pick. He played all of 33 games with Philadelphia as the “process” failed for Hinkie at the time.

During this very same span, Jayson Tatum was working his tail off to become the star we’re seeing today. He performed at a pretty high level in his first two NBA seasons as Ball and Fultz were struggling to transition to the NBA game or dealt with injuries. 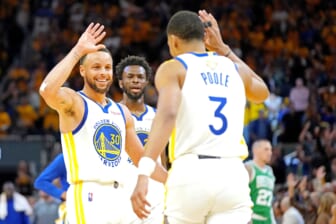 Tatum averaged 14.8 points and 5.5 rebounds on 46% shooting during that two-year span. He had taken a back seat behind Kyrie Irving as a rookie in 2017-18 for a Celtics team that won 55 games before losing to the LeBron James-led Cleveland Cavaliers in a hard-fought seven-game Eastern Conference Finals series.

Tatum made his impact known big time during his initial run in the postseason, averaging 18.5 points on 47% shooting. After playing second-fiddle to Irving during his sophomore campaign, the guard’s decision to depart for the Brooklyn Nets set things up for Tatum to star in Boston. He’s done just that since.

Tatum is now the face of a Celtics organization that had in the past been led by the likes of all-time greats Bill Russell and Larry Bird. He has Boston three wins from the NBA title. But it almost never was.

Boy, how one trade. One decision. One move. How it can change the NBA landscape for the next decade-plus. This Jayson Tatum story adds another layer to that.