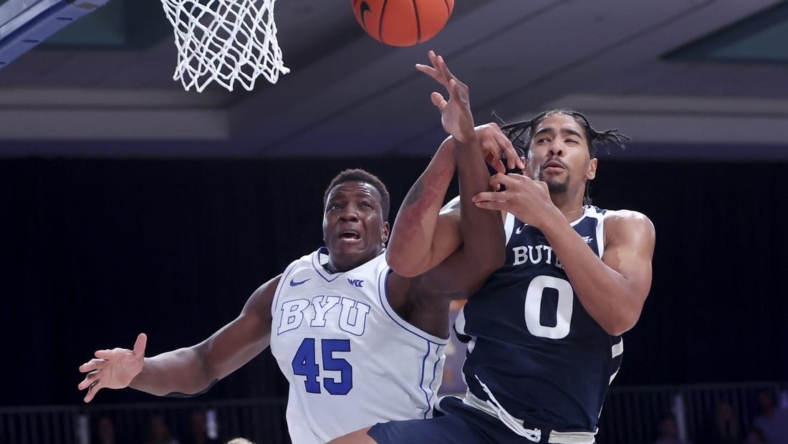 Jayden Taylor scored 20 points on 8-of-13 shooting and Simas Lukosius sank a pair of clutch free throws as Butler took down BYU 75-70 on Thursday night in a consolation-round game of the Battle 4 Atlantis tournament at Paradise Island, Bahamas.

After Manny Bates threw home an alley-oop dunk to put the Bulldogs (4-2) up by three, Lukosius was intentionally fouled with 12 seconds remaining and canned two shots at the charity stripe to effectively seal the victory. He and Bates each finished with 14 points, while Eric Hunter Jr. scored 19.

It was a tough night from behind the arc for the Cougars, who made just 3 of 20 shots (15 percent) from deep.

The Bulldogs started to pull away with 6:51 left to play, building an eight-point lead after Hunter hit a 3-pointer. Traore willed BYU back into it, though, scoring six points down the stretch to pull the Cougars back within three.

Williams then made a layup in transition to make it a one-point game.

Williams scored the first five of the Cougars’ 12 straight points to open the second, putting BYU up 42-37 just 2:38 into the half. But Butler quickly punched back, getting a 3-pointer from Taylor and a dunk from Bates to draw even.

After both teams experienced scoring droughts during the first half, a pair of short jumpers from Hunter headlined a 6-0 spurt by the Bulldogs that gave them a nine-point advantage with 3:41 left in the half.

The Cougars crept within five, but Butler took a 37-30 advantage into the break. Taylor and Lukosius had nine points apiece for the Bulldogs, who went 17 for 31 from the field before intermission.

BYU committed nine turnovers by halftime, and out of its eight scorers, none recorded more than five points.

Butler opened the game scoring at a torrid pace, canning 12 of its first 18 shots to take an early 26-18 lead.