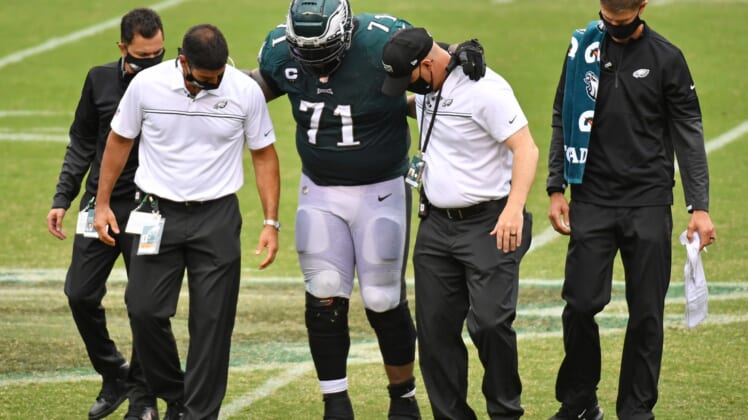 Offensive tackle Jason Peters plans to prepare for his 18th NFL season in 2021.

Appearing on NFL Network on Thursday, Peters said he has enough left in his tank to play next season at age 39.

“I don’t know about ‘a whole lot,’ but I still got some in the tank, and I can definitely show some of the young guys how to play the game of football,” he said. “You can know the Xs and Os, but I’m gonna be the one to stay with ’em after practice and show ’em how to really play the game, the technique, and the things about the detail of the football game throughout the course of the season.”

Peters has spent the past 12 seasons with the Philadelphia Eagles. He rejoined the team prior to the start of the 2020 regular season after it appeared the Eagles were headed another direction.

Peters, a nine-time Pro Bowl selection at left tackle, signed to play guard following Brandon Brooks’ season-ending injury. He wound up back at tackle due to a series of injuries.

One potential landing spot for Peters is Indianapolis, where he would reunite with quarterback Carson Wentz and offensive coordinator Frank Reich, now head coach of the Colts.

Reich and the Colts have a deal in place to acquire Wentz when the new league year begins March 17. Indianapolis is reshaping its offensive line due to the retirement of left tackle Anthony Castonzo.

“I knew it was gonna be Frank Reich ’cause when he was there, Frank had him running smooth,” Peters said of Wentz. “Super Bowl run, we went and got the trophy, and that was my deal on that. Carson is a great player, nothing really went wrong on that. He just was in Philadelphia. It’s a hard city to play for, man, they’re critical of every play, inch, foot, year. You gotta bring it every year or Philadelphia will eat you up, man.”