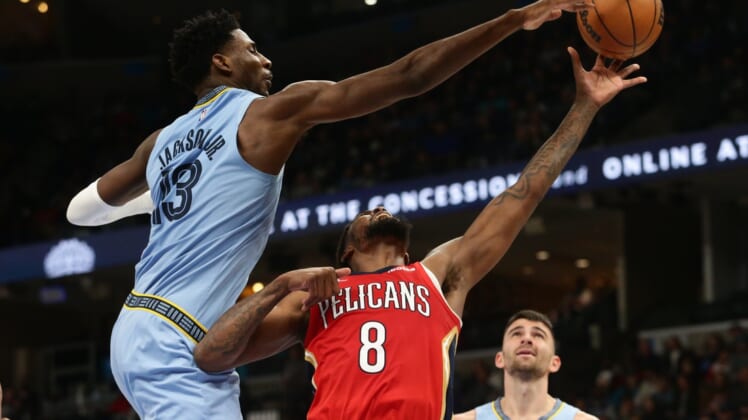 Ja Morant has been the face of the Memphis Grizzlies since winning Rookie of the Year honors two seasons ago.

But heading into Sunday’s road game against the Oklahoma City Thunder, Morant said it’s time that teammate Jaren Jackson Jr. gets his due.

“Enough of me. Jaren is what everybody needs to be excited about,” Morant said after Jackson fueled the Grizzlies’ comeback from an 11-point fourth-quarter deficit against the New York Knicks on Friday. “His defensive presence is big-time for us. We’re a totally different team with him out there on the floor.

“Like I said, he’s the Defensive Player of the Year, in my eyes.”

The fourth-year big man has elevated his game this season, and it has paid off.

Entering Sunday’s game, no one in the NBA other than Phoenix has more wins than the Grizzlies (46).

With 14 games remaining, Memphis already has more wins than it has had in any season since 2014-15, which also was the last time the Grizzlies made it out of the first round of the playoffs.

Jackson is tied for the league high with 2.2 blocks per game, but he’s far from a defensive specialist, averaging 16.4 points per game.

“When he’s very active on the floor, he’s at his best on both ends of the floor,” Morant said of Jackson.

Jackson is averaging 21.0 points and 4.5 rebounds per game in two meetings with the Thunder this season.

Sunday’s meeting is the third and final between the teams this season, and the only game in Oklahoma City.

The game is the first in a four-game trip for Memphis, all against teams with losing records.

The Thunder’s long list of injuries — seven players who played in the last meeting with Memphis have been out lately — has taken its toll, especially defensively.

After spending much of the season in the top 10 in the NBA defensively, Oklahoma City has lagged behind lately.

The Thunder have allowed 130 or more points in four of their last six games.

During that span, Oklahoma City’s 123.7 defensive rating is the worst in the NBA.

“We’re down a lot of guys,” forward Darius Bazley said. “I don’t really think that’s an excuse. It’s just the reality of it. We’re missing a lot of really key guys, core guys, and it hurts us on both ends of the floor.”

The Thunder don’t figure to get much help down the stretch.

“Excuses are excuses because there’s an accuracy to them,” Thunder coach Mark Daigneault said. “But we want to develop a mentality of not having excuses and focusing on what we can control and continuing to hold high standards regardless of who puts the uniform on.

“Back-to-back, injuries, whatever the reasons are, that’s all true, but at the same time, there’s no sense in dwelling on it.”