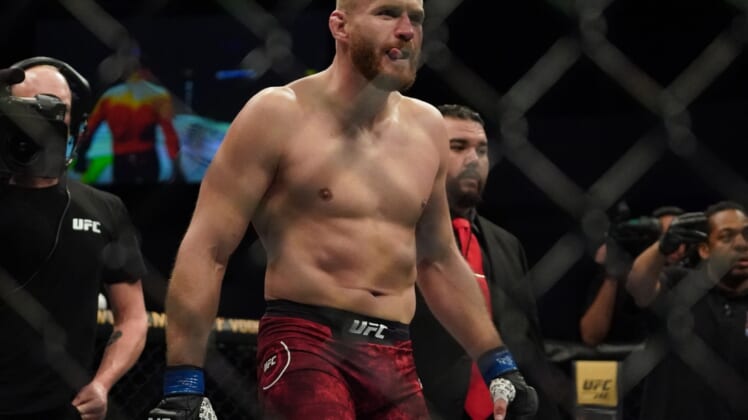 Israel Adesanya wasn’t afraid to reach for the top, but defeating Jan Blachowicz was too steep a mountain to climb.

UFC middleweight champion Adesanya (20-1) stepped up in weight to challenge for Blachowicz’s light heavyweight belt Saturday night in the main event of UFC 259. But Blachowicz’s size advantage spelled the difference as he won the fight in Las Vegas via unanimous decision on scores of 49-46, 49-45 and 49-45.

Each of the first three rounds were close, tactical stand-up affairs in which both fighters landed big shots. But New Zealand’s Adesanya appeared to be giving up about 25 pounds to his foe, and Poland’s Blachowicz (28-8) used this to his advantage in the final two rounds, using takedowns and grappling to overwhelm his foe and seal the deal.

“I knew if I got him to the mat, if I take him down, I’m bigger than him and I wear him down,” Blachowicz said.

In the evening’s co-feature bout, UFC women’s featherweight and bantamweight champion Amanda Nunes (21-4) continued her incredible run, as she successfully defended her 145-pound crown against an overmatched Megan Anderson (11-5).

Nunes swarmed Anderson with pinpoint striking, then finished things at the 2:03 mark of the opening round with a triangle armbar submission.

Nunes has now won 12 straight bouts dating back to 2015. She has been featherweight champion since December 2018 and bantamweight titleholder since July 2016.

The first of the evening’s three title fights featured the first championship change via disqualification in the UFC’s 27-plus-year history. In a bantamweight title fight, Russia’s Petr Yan inexplicably drilled Aljamain Sterling with a flagrant illegal knee to the head while Sterling was grounded during the fourth round of their fight.

Yan (15-2) was up on the scorecards at the time, but Sterling (20-3) was plainly concussed, and the doctor called off the fight at the 4:29 mark of the fourth round.

Long Island’s Sterling thus becomes champion via DQ, although he took the belt off as soon as UFC president Dana White put it around his waist, saying he didn’t want to win the belt that way.

“Not the way I ever want to win a fight,” Sterling tweeted later. “I felt the knee was intentional, especially after the ref announced I was a downed opponent, so I didn’t expect to be hit. Yan is a bad dude! WE WILL DO IT AGAIN!”