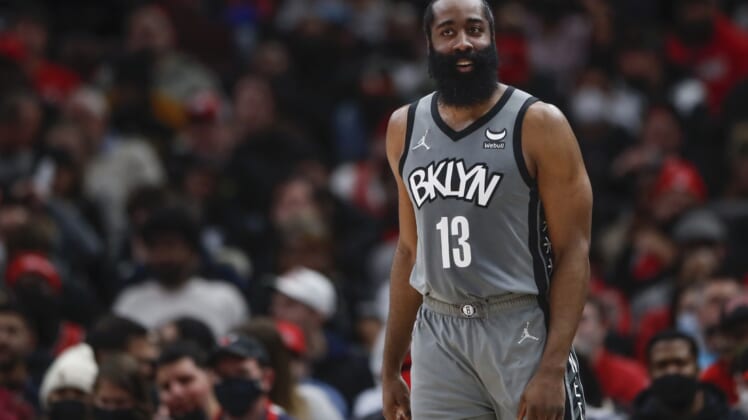 The unexpected has happened. Amid numerous reports that now-former Brooklyn Nets star James Harden wanted out of dodge, the Nets officially pulled off a blockbuster with the Philadelphia 76ers of epic proportions.

According to ESPN’s Adrian Wojnarowski, Harden is headed to the 76ers for a package surrounding embattled three-time point guard Ben Simmons. Seth Curry, Andre Drummond and two first-round picks are also going to Brooklyn in the blockbuster.

To say that this changes the landscape of the Eastern Conference championship race in one fell swoop would be a major understatement.

In his first full season with the Nets since being acquired from the Houston Rockets in a blockbuster trade, Harden seemingly grew unhappy. A lot of that had to do with Kyrie Irving’s vaccination status and the injuries Kevin Durant has suffered through.

For Brooklyn, this is the break up of what many deemed to be the next true “super-team” around the NBA. It comes with James Harden, Kevin Durant and Kyrie Irving playing very few games together.

As for Philadelphia, Ben Simmons had not played at all this season due to continued issues with the 76ers’ organization after he requested a trade last offseason.

This comes with both Philadelphia and Brooklyn considering themselves top-end title contenders in the Eastern Conference. The Nets have fallen on hard times recently with Durant sideliend (sprained MCL) and Irving unable to play home games due to his vaccination status. Brooklyn has lost nine consecutive and sits at 29-25 — good enough for the eighth seed in the conference.

As for the 76ers, they have been playing great ball under the leadership of NBA MVP candidate Joel Embiid. Philadelphia has won 16 of 22 since a mediocre start to the season. Teaming Embiid up with