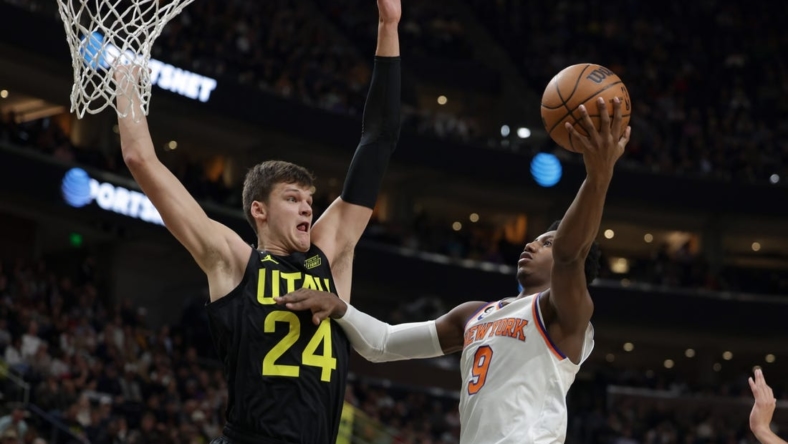 Jalen Brunson scored 25 points and dished out eight assists to lead the New York Knicks past the Utah Jazz 118-111 on Tuesday night in Salt Lake City.

Brunson, who signed a four-year contract with New York in the offseason after helping defeat Utah in the first round of the 2022 playoffs with Dallas, scored eight consecutive Knicks points during the fourth quarter as the visitors built a double-digit lead and seized control for good.

Cam Reddish added 19 points, RJ Barrett chipped in with 18 points and Julius Randle scored 15 as New York began a five-game Western Conference road trip on the right note. The Knicks have alternated losses and wins over their past eight games.

Kelly Olynyk scored a season-high 27 points and grabbed 11 rebounds to top Utah, but the Jazz had an off night from the field (43.4 percent) and fizzled in the fourth quarter.

Utah’s Jordan Clarkson scored 15 points but shot only 5-for-16. Malik Beasley totaled 14 points, and Lauri Markkanen, the team’s leading scorer, only scored 13 as the Jazz lost their third consecutive game.

Utah, playing its third game in three cities in four nights, lost for the first time at home this season after winning their first five contests in Salt Lake City.

Simone Fontecchio gave the Jazz an 85-83 lead heading into the fourth quarter with a last-second 3-point shot at the end of the third. The trey ended a 7-0 run by the Knicks that momentarily gave them a one-point lead following Jericho Sims’ alley-oop dunk with 13.8 seconds left in the period.

Mike Conley sank a jumper, bringing Utah within 10, but Brunson pushed the Knicks’ lead to 14 with consecutive makes.

The Jazz pulled within six after a Clarkson 3-pointer followed by a pair of Olynyk free throws with 2:31 remaining, but Reddish hit a pair of foul shots to end Utah’s last push.

Brunson put New York up 61-58 at halftime with a buzzer-beating 3-pointer.