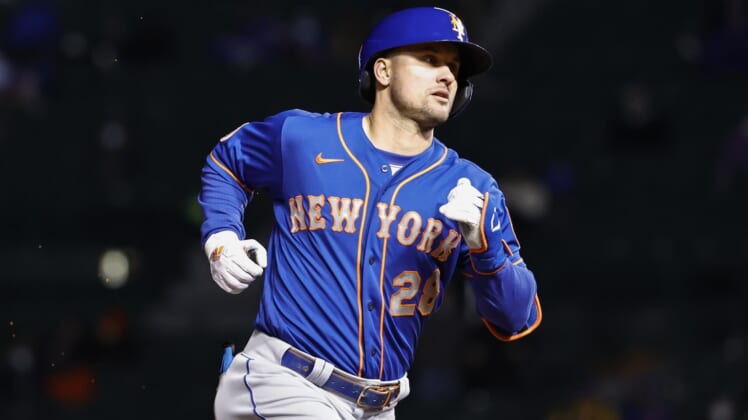 Jake Arrieta pitched five strong innings and Eric Sogard had two hits and an RBI in an emergency start to lift the host Chicago Cubs to a 3-1 victory against the New York Mets on Tuesday night.

Cubs closer Craig Kimbrel walked two of the first three hitters to open the Mets ninth before allowing a single to load the bases, but recovered to escape unscathed and notch his fourth save.

Arrieta spaced one run on three hits in five innings while walking three and striking out four. He improved to 3-1 on the season.

Mets righty Taijuan Walker cruised in the early going, retiring six Cubs in a row and eight of nine after walking Ian Happ to open the game.

Walker allowed an unearned run in the third, as a throwing error by Davis at third base allowed the first Chicago run to score, but Walker’s own control issues proved his undoing in the fourth. After striking out the first two batters, Walker (0-1) allowed consecutive singles to Jason Heyward and Sogard, with Sogard driving in a run after Heyward stole second base.

Walker then issued three straight walks, reaching a 3-2 count on each batter. The third free pass in the sequence, to Willson Contreras, forced in a run and proved to be Walker’s final hitter. He was ejected for arguing with home plate umpire John Libka upon being pulled from the game after allowing three runs — two earned — and two hits in 3 2/3 innings with six walks and seven strikeouts.

Davis got the Mets on the board with a solo home run to center leading off the fifth.

David Bote was a late scratch for the Cubs due to an upset stomach. Sogard replaced him in the lineup, batting eighth and playing second base.

The teams combined to strand 18 runners and were a collective 2-for-11 with runners in scoring position.