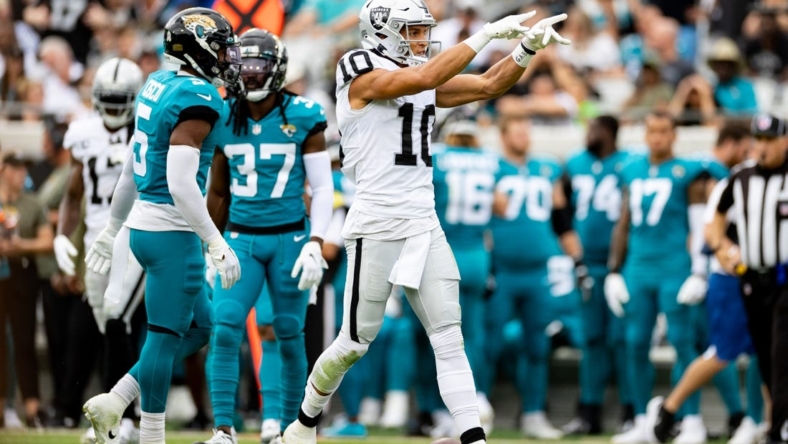 Travis Etienne Jr. rushed for 109 yards and two touchdowns as the Jacksonville Jaguars ended a five-game losing streak with a 27-20 victory against the visiting Las Vegas Raiders on Sunday afternoon.

The Jaguars trailed 20-10 at the half before Jamal Agnew ran the second half kickoff back to the Las Vegas 46-yard line. Jacksonville scored nine plays later on a 7-yard pass from Lawrence to Christian Kirk to cut the deficit to 20-17 with 10:15 left in the third quarter.

Etienne scored his second touchdown on a 5-yard run on the first play of the fourth quarter to cap a 12-play 82-yard drive and give the Jaguars their first lead at 24-20.

The Raiders failed to convert a fourth-down pass with 2:25 left, and Riley Patterson kicked a 48-yard field goal to extend the lead to 27-20 with 1:03 remaining.

Carr hooked up with Adams for a 25-yard touchdown on the second drive of the game to give the Raiders a 7-0 lead with 4:45 left in the first quarter.

The Raiders extended the lead to 17-0 with 10:51 left in the first half. Carr faked a double reverse and hit Adams wide open in the middle of field for a 38-yard touchdown, the 80th of Adams’ NFL career.

The Jaguars altered the dynamic from there. Etienne scored on a 1-yard run to cut the lead to 17-7 with 4:50 left in the first half.

Carlson nailed another 38-yarder, his 41st consecutive made field goal, to extend the lead to 20-7 with 45 seconds left in the first half.

The Jaguars had time to move the ball into Raiders territory and cut the lead to 20-10 on a 44-yard field goal by Patterson as time expired.