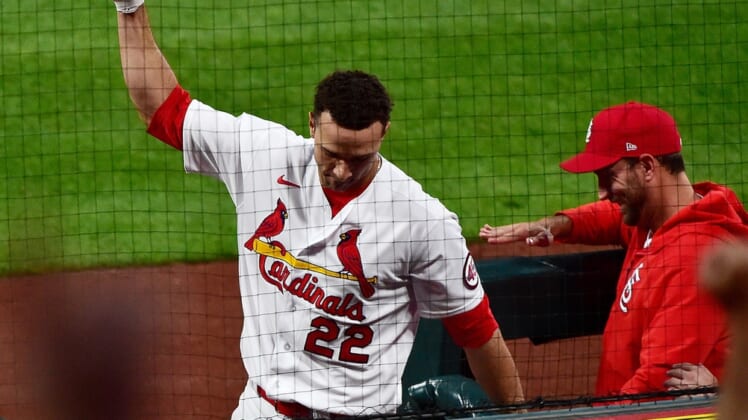 Flaherty (6-0), the first six-game winner this season, struck out six batters while allowing just three hits and a walk. He retired the last 13 batters he faced.

After allowing six runs in the season opener, Flaherty has allowed just seven runs in his last six starts.

Ryan Helsley retired the Rockies in order in the eighth inning, and Genesis Cabrera closed out the ninth inning as the National League Central-leading Cardinals won for the seventh time in the last nine games.

Harrison Bader hit a two-run homer for the Cardinals, and Nolan Arenado had two hits in his first game against his former team.

Rockies starting pitcher Austin Gomber, who came to Colorado from the Cardinals in the Arenado trade, allowed five runs on six hits in five innings.
Gomber (2-4) struck out seven batters and walked none.

The Rockies threatened to score just once on Flaherty, when they briefly loaded the bases in the first inning.

Ryan McMahon and Charlie Blackmon hit two-out singles and Garrett Hampson reached on an infield single. But Blackmon rounded second base too far on Hampton’s hit, and Cardinals shortstop Paul DeJong picked him off to end the inning.

Arenado hit a leadoff double in second inning and came in on Bader’s homer as the Cardinals moved ahead 2-0.

Flaherty pushed the lead to 3-0 in third inning with his first career homer, a 416-foot shot into the third deck in left field.

The Cardinals tacked on two more runs in the fifth inning. Andrew Knizner hit a bloop single to break a 0-for-20 slump. One out later, Tommy Edman hit a single, and Knizner scored on Dylan Carlson’s single. Edman scored on Paul Goldschmidt’s groundout to make it 5-0.