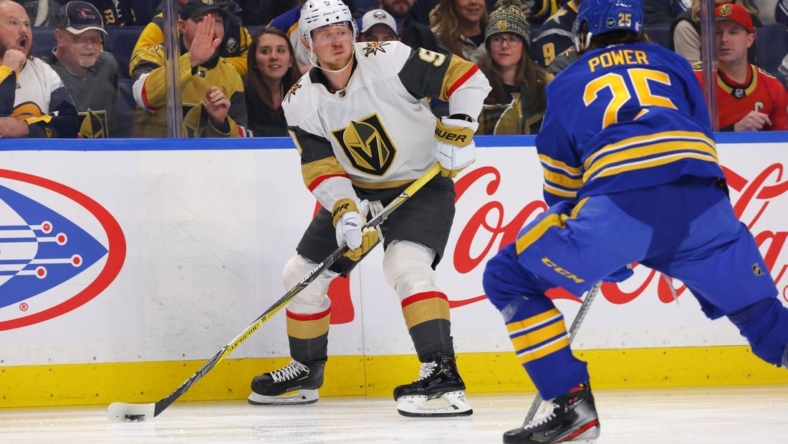 Jack Eichel scored a third-period hat trick and also had an assist as the visiting Vegas Golden Knights won their ninth consecutive game, beating the Buffalo Sabres 7-4 on Thursday night.

It was the third career hat trick for Eichel, who was also stopped twice on breakaways, hit the post on another shot and fired another empty-net try wide. Eichel sealed the hat trick with a 195-foot empty-netter from the right corner with 7.6 seconds left.

Chandler Stephenson had a goal and three assists, Alex Pietrangelo contributed a goal and two assists, Paul Cotter added a goal and an assist and Phil Kessel also scored for Vegas, which completed a sweep of a five-game Eastern Conference road trip.

Logan Thompson made 31 saves and Nicolas Roy added two assists for the Golden Knights, who moved within a game of the franchise-record, 10-game win streak achieved in April 2021.

Vegas took a 1-0 lead at the 5:44 mark on a power-play goal by Stephenson. Jonathan Marchessault blasted a shot from the left point that Comrie made a pad save on, but the puck went right to Stephenson at the bottom of the right circle, where he slapped the rebound into an open right side of the net.

Buffalo tied it at the 16:23 mark of the first on a power-play goal by Tage Thompson. He rifled a wrist shot from the left circle under Logan Thompson’s left arm.

The Golden Knights took a 2-1 lead early in the second period when Kessel finished a two-on-one with Roy with a one-timer inside the near post from the left circle.

The Sabres tied it on Mittelstadt’s power-play goal at 14:09 of the second, but Vegas regained the lead three minutes later on Cotter’s breakaway goal.

The Golden Knights made it 5-2 early in the third period on goals by Pietrangelo, whose shot from the right point deflected in off the shaft of the stick of defenseman Jacob Bryson, and Eichel, who put in a rebound of a Pietrangelo shot.

Tage Thompson cut it to 5-3 midway through the period when he a roofed a wrist shot over Thompson’s left shoulder. Eichel answered five minutes later when he fired a wrist shot through Comrie’s pads at the end of Golden Knights’ eighth odd-man rush of the game.

Asplund cut it to 6-4 with a short-handed goal with 3:29 left before Eichel ended the scoring with his length-of-the-ice empty-netter.