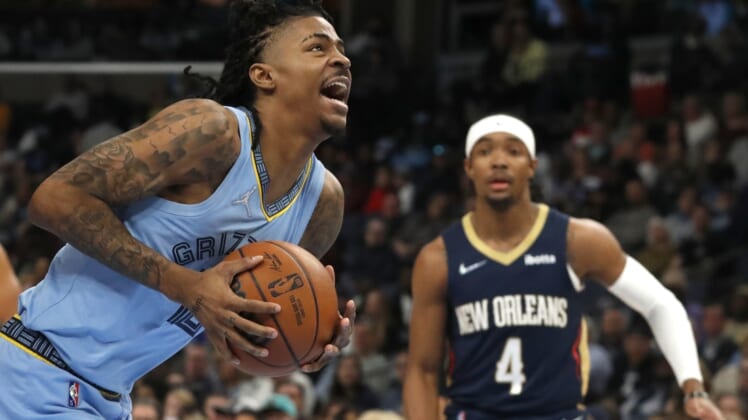 Ja Morant returned from an nine-game absence and the host Memphis Grizzlies had a record scoring quarter in a 141-114 rout of the New Orleans Pelicans on Saturday.

Morant, who had been sidelined due to a sore right knee, scored 21 points and dished out nine assists in 27 minutes.

Dillon Brooks scored 23 points, Brandon Clarke added 20, Ziaire Williams had 19, Desmond Bane had 18 and De’Anthony Melton and Jaren Jackson Jr. put up 12 each for Memphis (56-25), which made 18 of 35 3-point attempts and tied the franchise record for victories in a season.

The Grizzlies, locked into the second seed in the Western Conference, can break the record by beating the visiting Boston Celtics in the regular-season finale on Sunday.

CJ McCollum scored 16 points, Willy Hernangomez had 15 points and 10 rebounds, Jaxson Hayes scored 13 and Jose Alvarado and Jared Harper added 12 points each for the Pelicans, who made 6 of 30 long-range shots.

The Grizzlies began their third-quarter scoring with a three-point play by Morant and a 3-pointer by Bane as they built a 75-49 lead. Memphis kept pouring it on before emptying the bench early in the fourth quarter.

Williams made consecutive 3-pointers to start a 10-3 run that gave the Grizzlies a 30-18 lead at the end of the first quarter.

Alvarado made a basket to start the second-quarter scoring, but Williams sank two 3-pointers and Bane made one as Memphis expanded the lead to 43-26.

New Orleans scored the next four points and got as close as 11 points on three occasions. However, the Grizzlies rebuilt the lead to 17 points twice more, including a 64-47 halftime lead.

Memphis made 8 of 15 3-pointers before halftime while New Orleans was 1 of 15.