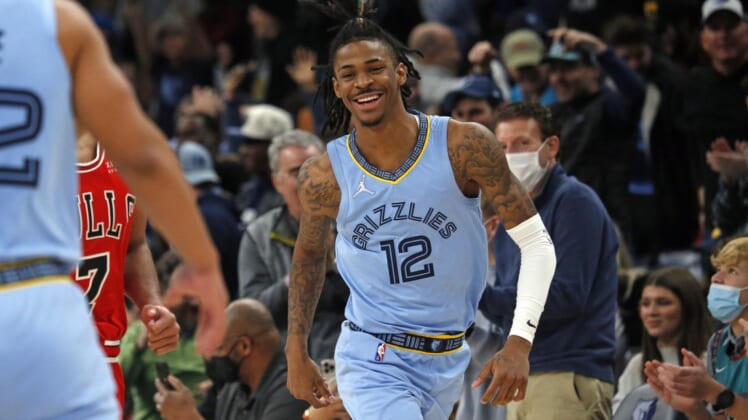 The Memphis Grizzlies look to continue their stunning play in January when they visit the Milwaukee Bucks on Wednesday night to begin a four-game road trip.

Memphis opened the month on a seven-game win streak before falling to the Dallas Mavericks on Friday, but bounced back with a 119-106 victory over the Chicago Bulls on Monday in their most recent game.

Ja Morant and Desmond Bane paced the Grizzlies with 25 points apiece. Brandon Clarke added 15 points on 7-of-8 shooting to go along with seven rebounds off the bench, and Jaren Jackson Jr. finished with 14 points.

“It was big time for us, especially after coming off a loss. We had to turn the page and get back in the column we want to be in, which is the winning column,” Morant said. “We got to take this momentum and energy on the road. A big road trip for us, so we definitely needed this one.”

Morant and Memphis have been red hot on the road as of late. The Grizzlies have won their past six games away from home dating back to Dec. 26, and the star guard has averaged 25.8 points during the streak.

Jackson also has been finding his rhythm on both sides of the ball. The 6-foot-11 forward is averaging 16.9 points, 7.3 rebounds and 3.4 blocks over his past eight games.

“His rim protection allows us to get out and run, and also stop the other team from scoring,” Morant said. “Even if he doesn’t block the shot, he’s still affecting the shot and forcing guys to take tough shots down there, and that works in our favor.”

The Bucks have not been nearly as consistent to start the new year, as they have dropped six of their past eight games. They have lost back-to-back games after falling 121-114 to the Atlanta Hawks on Monday.

“I think they (the Hawks) just took control of the game mainly in that second half, that third quarter,” Middleton said. “They found sets that they could run, take advantage of and find open shots.”

Milwaukee likely will be without one of its best defenders Wednesday, as Jrue Holiday has been dealing with an ankle injury that has sidelined him for the past six games. Brook Lopez is also out after back surgery in early December.

Middleton has stepped up in Holiday’s absence and has averaged 24.5 points, 6.5 rebounds and 6.8 assists over the past six games. He has posted at least 20 points in five of those games and has also recorded a pair of double-doubles.

Although they are 14-8 at home this season, the Bucks have gone 2-3 in Milwaukee this month. They failed to shoot above 45 percent from the field in all three losses and gave up at least 115 points in two of them.