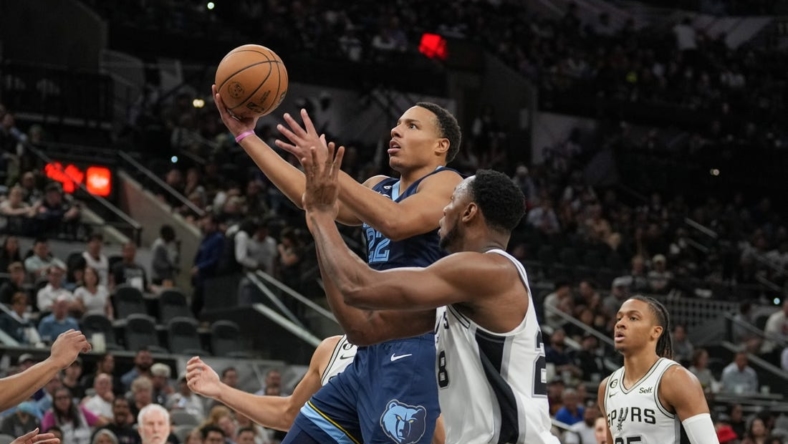 Ja Morant and Desmond Bane each scored 32 points and combined to tally Memphis’ final seven points as the visiting Grizzlies outlasted the struggling San Antonio Spurs 124-122 in a wild overtime on Wednesday.

Memphis began the extra period on an 11-2 run but the Spurs staged a furious rally to claw back within a point at 123-122 with 14.3 seconds left. Morant’s free throw with 5 seconds remaining put the Grizzlies up by two. But after a timeout, San Antonio’s Devin Vassell missed a contested 3-pointer at the buzzer.

The Grizzlies trailed by five points heading into the fourth quarter of a back-and-forth game but opened the frame on a 12-2 run to sweep back to the front. The lead changed hands four times before a dunk by Jeremy Sochan off a Keldon Johnson assist tied it at 112 with 1:25 to play.

Both teams then missed on consecutive possessions before Johnson’s final shot of the quarter rimmed out at the buzzer to send the contest into overtime.

Dillon Brooks added 13 points, Tyus Jones had 11 and Steven Adams grabbed 19 rebounds for the Grizzlies, who have won four of their past five games. Memphis has now won seven straight games against the Spurs.

The Spurs pulled to the front at 51-49 on Doug McDermott’s 3-pointer with 7:04 to play in the second period. After Memphis rebuilt as much as a four-point advantage, San Antonio tied the game at 57 after a Romeo Langford dunk at the 3:15 mark of the quarter. Eventually a Brooks 3-pointer and a Morant floating jumper helped the Grizzlies grab a 66-59 lead at the break.

Morant led Memphis with 18 points at halftime while Brooks hit for 10. Vassell paced the Spurs with 15 points before halftime.