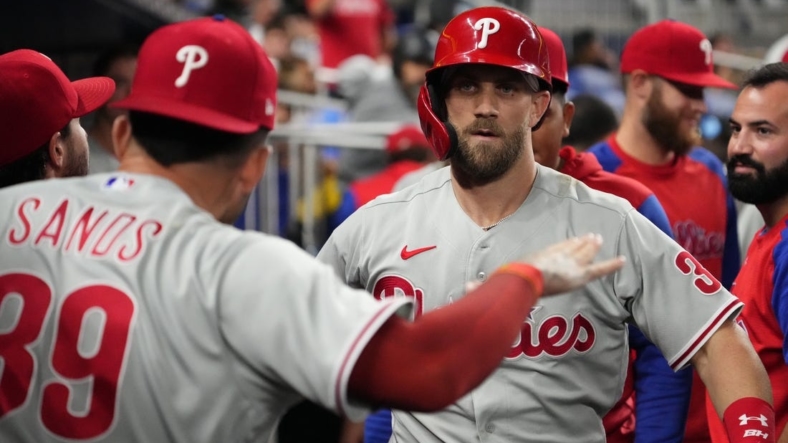 J.T. Realmuto homered twice and drove in four runs, leading the Philadelphia Phillies to a 6-1 win over the host Miami Marlins on Wednesday night.

Bryce Harper also went deep for the Phillies (80-62), who earned their fifth consecutive win. Realmuto has 18 homers this year, Harper has 17.

The Marlins (58-85) will try to avoid a three-game sweep on Thursday night.

Phillies first baseman Rhys Hoskins was hit by a pitch on his right hand in the third inning, and he was forced to leave the game with what was called a bruise.

Kyle Gibson (10-6) earned the victory, reaching double-digit wins for the seventh time in his 10-year career. He went six innings, allowing one run on six hits and no walks while striking out seven.

Edward Cabrera (5-3) took the loss after giving up two runs on three hits and three walks with four strikeouts in 5 1/3 innings.

Marlins third baseman Jordan Groshans, who made his major league debut by going 0-for-3 on Tuesday, went 3-for-3 on Wednesday.

Miami opened the scoring in the first inning, getting four straight singles but just one run. JJ Bleday got the RBI single, but Miguel Rojas was picked off at first base earlier in the frame, and Nick Fortes was tagged out between second and third to end the inning.

Philadelphia nearly tied the score in the fifth, but Jean Segura’s long drive was caught at the left field fence by a leaping Jon Berti.

Harper tied the score in the sixth, winning a seven-pitch battle with Cabrera by belting a changeup 404 feet to left-center.

Realmuto followed by hitting a 0-1 slider 420 feet to center. Marlins manager Don Mattingly then went to reliever Richard Bleier, who gave up a single to Bryson Stott and an RBI double to Segura before escaping the inning.

Brad Hand, Zach Eflin and Connor Brodgon each threw a scoreless inning to seal the Phillies’ seventh win in eight games. The Marlins have lost five of the past six.