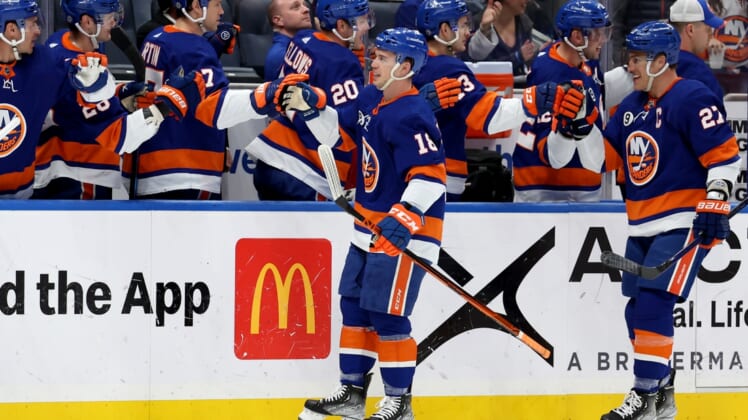 Anthony Beauvillier scored just nine seconds into the first period Thursday night for the host New York Islanders, who were never threatened in a 5-2 win over the Detroit Red Wings in Elmont, N.Y.

Brock Nelson scored twice while Oliver Wahlstrom and Josh Bailey also had goals for the Islanders, who have won seven of nine (7-1-1). Goalie Ilya Sorokin carried a shutout deep into the third and finished with 37 saves.

Pius Suter and Sam Gagner scored in the third for the Red Wings, who have lost eight of 10 (2-7-1). Goalie Thomas Greiss, who played with the Islanders from 2015 through 2020, recorded 13 saves in the first two periods before being pulled for Alex Nedeljkovic, who stopped eight of 10 shots.

The Red Wings won the opening faceoff, but Anders Lee harassed Filip Hronek into the Detroit zone and knocked Hronek’s stick out while jabbing the puck. Lee collected the puck and dished to Beauvillier, who finagled a shot around Marc Staal and past Greiss for the prompt goal.

The goal was the second-fastest to open a game in franchise history. Bryan Trottier scored five seconds after faceoff against the Boston Bruins on March 22, 1984.

End-to-end rushes by Mathew Barzal led to the Islanders’ next two goals. Barzal fired a puck off the boards while eluding Hronek before he came to a screeching stop and passed to Wahlstrom, who fired a shot under Greiss’ glove arm with 3:53 left.

The Islanders extended the lead to 3-0 with a power-play goal shortly beyond the midway point of the second. After Barzal dashed through the neutral zone, he passed to Lee, who in turn passed to Nelson as the center was being pestered by Oskar Sundqvist. Nelson fell as Sundqvist clipped his skate with his stick but still managed to direct a shot beyond Greiss’ stick hand with 8:21 left.

Bailey scored off a no-look pass from Kyle Palmieri 1:19 into the third before the teams combined for three goals in a span of under two minutes late in the period. Suter ended Sorokin’s shutout bid by redirecting Hronek’s shot with 6:35 remaining.

Nelson capped a nifty exchange with Lee and Beauvillier by scoring from point-blank range to the right of Nedeljkovic just 42 seconds later before Gagner scored off a Sebastian Aho turnover with 4:42 left.