Islanders look to avoid another late letdown vs. Blues 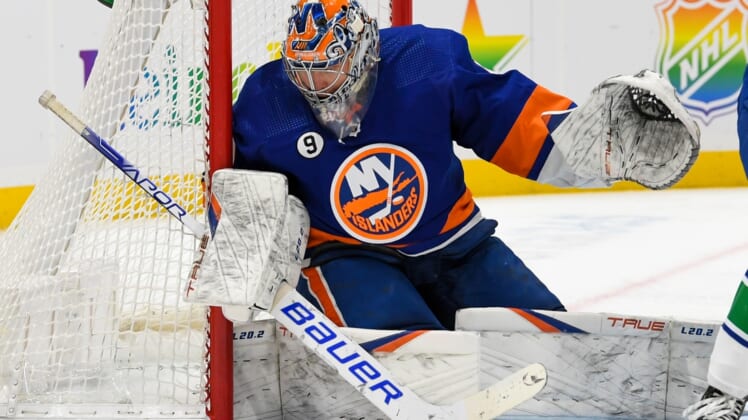 When New York was mired in an 11-game losing streak in November, coach Barry Trotz mentioned the 2018-19 St. Louis Blues as evidence that the Islanders could reverse their slide and make a run at the Stanley Cup.

But the sight of the Blues on Saturday afternoon in Elmont, N.Y., will likely serve to remind the host Islanders just how far away they still are from mounting a Cinderella surge.

The Islanders were off Friday after surrendering the tying and go-ahead goals in a 45-second sequence around the midway point of the third period Thursday night in a 4-3 loss to the visiting Vancouver Canucks.

The Blues are continuing a four-game road trip after suffering a 5-3 loss to the New York Rangers on Wednesday night.

Thursday’s loss marked the second straight time the Islanders squandered a third-period lead and frittered away an opportunity to gain some momentum. On Tuesday night, New York capped a five-game road trip by giving up the final three goals to the Stanley Cup-contending Colorado Avalanche in a 5-3 loss.

“There’s good things in our game that you’d like,” Trotz said. “But every mistake we make seems to end up in the back of our net, where last year and maybe the year before, it didn’t.”

New York, which made back-to-back runs to the NHL semifinals the previous two years, was a popular pick to at least play for the Stanley Cup entering the season.

But the Islanders have mostly been treading water over the last three months; they are 15-13-3 since snapping the 11-game losing streak Dec. 7. They entered the weekend 19 points behind the Washington Capitals in the race for the second Eastern Conference wild card and are running out of time to match the Blues’ feat in 2018-19. St. Louis ranked last in the NHL in points in early January that season before rallying to win its first Stanley Cup.

“It’s been done before,” Trotz said following the seventh defeat in the losing streak, a 4-1 loss to the Rangers on Nov. 24. “A team won a Stanley Cup by being where we were at this time a few years back.”

Despite Tuesday’s loss, St. Louis appears well-positioned to make another run at a championship. The Blues have endured just two losing streaks since Dec. 1, a span in which they’ve gone 20-8-3 to move three points clear of the Minnesota Wild in the race for second place in the Central Division.

Blues center Ryan O’Reilly said he hoped the loss Tuesday — in which the Blues led 3-2 after two periods — would serve as a bit of a reminder of the intensity that is needed for the playoff push and beyond.

“It’s a lesson for us,” O’Reilly said. “I think we’re a better team than them. I think we can beat them and we just didn’t have the full 60 that we needed to tonight.”

The Islanders and Blues didn’t play one another last season, when regular season play consisted entirely of divisional games. The teams last played on Feb. 27, 2020, when Colton Parayko scored with 1:37 left in overtime to lift the host Blues to a 3-2 win.