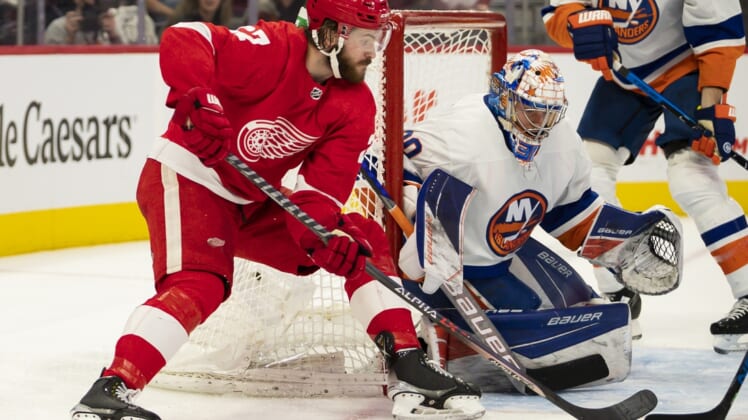 An unprecedented set of early season hurdles kept the New York Islanders from playing to their potential until it was too late to save their playoff hopes.

But the Islanders will continue to try and provide what they hope is a sneak preview of things to come for next season on Thursday night when the Detroit Red Wings visit for a battle of Eastern Conference rivals in Elmont, N.Y.

Both teams are coming off wins at home Tuesday night, when the Islanders scored three goals in the third period of a 3-0 victory over the Ottawa Senators and the Red Wings beat the Philadelphia Flyers, 6-3.

The win was the seventh in the last 10 games (7-2-1) for the Islanders, who made the NHL semifinals in each of the previous two seasons and opened the 2021-22 campaign as one of the Eastern Conference favorites to reach the Stanley Cup Final.

But New York’s lofty aspirations all but ended during an 11-game losing streak from Nov. 7 through Dec. 5 that began at the end of a franchise-record 13-game road trip and included a COVID-19 outbreak within the locker room.

The Islanders entered Thursday 17 points behind the Washington Capitals in the race for the final Eastern Conference wild-card spot.

New York — which has allowed the third-fewest goals in the NHL this season — has outscored the opposition 34-20 over the last 10 games, a span in which it’s surrendered more than three goals in regulation just once.

“We believe in this group, this team and what we’re capable of — I think it’s in that room,” said Islanders captain Anders Lee, who scored the second goal Tuesday night. “Whether it’s all the circumstances that have led to this point and put us in this position — you kind of heard us talk about this the past few weeks that regardless of where we’re at, we’re building this team up as much as possible and working towards our final goal.”

The Red Wings enter Thursday fresh off a decidedly different stretch. Detroit is 3-8-1 since returning from the All-Star break, a span in which it has been outscored 57-39.

Closing out the win over the Flyers after entering the third period with a 4-2 lead provided some relief to the Red Wings, who allowed four unanswered goals in the third period of a 4-2 loss to the Seattle Kraken on Sunday night.

Detroit has been outscored 19-10 after the second period over the last 10 games.

“We’ve had to be honest with ourselves — we haven’t been playing well enough lately,” said Red Wings left winger Jakub Vrana, who scored twice Tuesday night. “Today will do a lot for our confidence — just getting out there and playing a good game.”